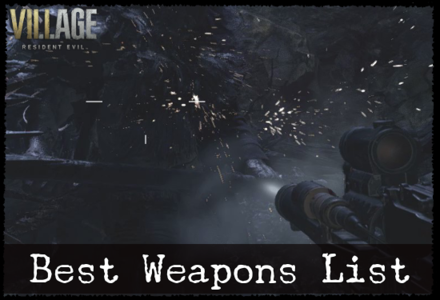 M1911 is the first automatic weapon you can get in the game. Consider investing in it, as it performs better than the starting weapon – LEMI. Its upgrade cost is also not that high, and you can get it early in the game.

The W870 TAC is the shotgun you will likely be using for a good majority of the story until the SYG-12 becomes available. In comparison to the M1897, the W870 TAC's stats are noticeably better especially after upgrading. Another selling point of this shotgun is that you can get it just after clearing House Beneviento, and the attachments for this weapon become available shortly after.

The F2 Rifle is, without a doubt, the best sniper rifle, as it is the only sniper rifle in the game. Shooting and killing enemies from a distance is an easy task for the F2 Rifle because of its high accuracy, long range, and excellent firepower. You can get the F2 Rifle early in the game, in the Attic of Castle Dimitrescu.

The M1851 Wolfsbane is a powerhouse of a weapon, even more than the F2 Rifle. The M18151 Wolfsbane is an effective tool against tougher enemies and bosses. It is obtainable after defeating Moreau and is useful for the next area, the Stronghold. Upgrading it is costly, but it is worth the price if you plan to move on to higher difficulties.

Nearing the end of the story, you'll be able to get the V61 Custom through Duke's Emporium after reaching Heisenberg's Factory on your first run. V61 Custom is a fully automatic weapon with the highest stats of all handgun weapons, making it the best handgun you can get in the game. Its customizable parts can be purchased from the Duke in New Game +, making it even stronger. You can buy the V61 Custom attachments quickly as well, for they will be available from Duke the moment you buy them. It will also be easier to upgrade it for most enemies in the end game drops a lot of money or even valuable treasures.

The SYG-12 is the best end-game shotgun you can get. Focus on upgrading it after reaching New Game +, as it has the power to one-shot most mobs even at higher difficulties. It's also a good weapon when fighting 1-on-1 against Bosses.

The WCX is the best assault rifle in the game. Focus on fully upgrading this weapon's stats and equip all of its attachments for higher performance. The WCX is a solid choice for clearing the Village of Shadows difficulty on New Game +.

The S.T.A.K.E. is the best magnum in the game. With maxed-out firepower of 4500, it can one-shot most mobs on any difficulty. It will be of great help on a second playthrough. The S.T.A.K.E. will be purchasable from the Duke on your second run of the story.

Though Rocket Pistol is a handgun weapon, it fires off small rockets that explode on impact. No matter who your enemy is, you'll be fine as long as you have the Rocket Pistol. You can get it after beating the game at least once on the Village of Shadows Difficulty difficulty.

The Karambit Knife is one of the top weapons for the melee category. It deals more damage against enemies than the default Knife you have at the start. It is a recommended weapon if you want to go for a Knife only run to get the Knives Out achievement.

The LZ Answerer ranks first in all the melee weapons in terms of power, range, and even aesthetic in the game. LZ Answerer is highly recommended to use when trying to do the Knives Out challenge on Hardcore or Village of Shadows Difficulty.

Resident Evil Village offers a wide selection of weapons throughout your playthrough. While some are only available later on, mixing and matching weapons to suit your playstyle will certainly give you a different experience every time.
List of Weapons

Register as a member and get all the information you want. (It's free!)
Login
Opinions about an article or post go here.
Opinions about an article or post
We at Game8 thank you for your support.
In order for us to make the best articles possible, share your corrections, opinions, and thoughts about "Best Weapons List" with us!
When reporting a problem, please be as specific as possible in providing details such as what conditions the problem occurred under and what kind of effects it had.