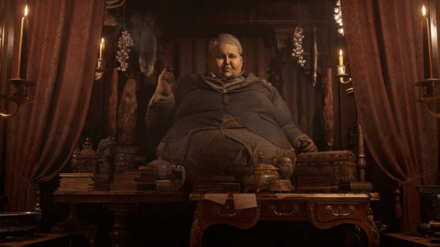 The Merchant, last seen in Resident Evil 4, makes a return to Resident Evil Village in the form of the Duke – a resident of the Village itself. Read on to find out The Duke's story and role in the game! 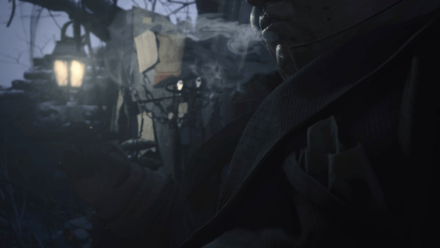 The Merchant is someone who shows up at different points in the game to sell you weapons and other useful items – appearing as a large man who interacts with you from his shop, The Duke's Emporium. The Duke provides you with a method to buy, sell, or modify your weapons in the game.

The Duke Profile and Backstory

Who is the Duke?

The Duke is a resident of the titular Village in which Resident Evil Village takes place in. What his ties to the Village or any of the other characters are unknown at this time. However, what is known is that the Duke will be essential to your survival in the Village. His many tools, such as weapons, weapon upgrades, and abilities, will give Ethan Waters an edge over the monstrosities of the Village.

Connection to the Merchant 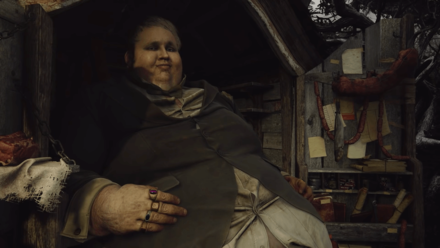 Although not outright saying it, The Duke does however use a common catchphrase that The Merchant from Resident Evil 4 uses often when players buy from them.

The Duke will say, "What are you buying?" and follow it up by saying that it was something an old friend of his used to say, indicating a possible friendship with The Merchant. 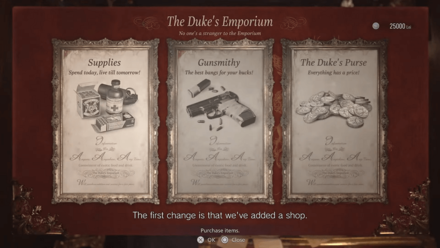 The Duke's shop is known as the Duke's Emporium, and this is were you will be able to buy and upgrade supplies and weapons.

The shop will also be featured in The Mercenaries mode. Find The Duke in between areas to use money you earned to buy items, weapons, and upgrades for your weapons. With limited money, you will want to choose carefully and make sure you are prepared for the next area! 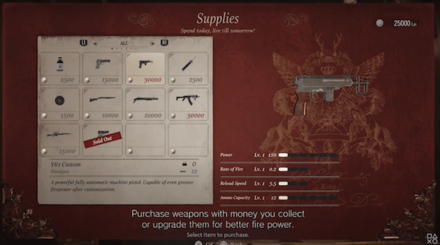 Different guns and supplies can be bought from The Duke. Be sure to find a weapon that suits your playstyle, or perhaps one that is more effective on the enemy you are preparing to face.

The Supplies section of The Duke's Emporium also plays a role in crafting items by selling recipes you can use to craft weapons and ammunition. 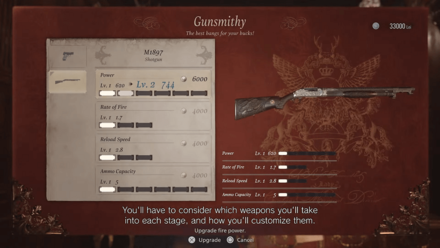 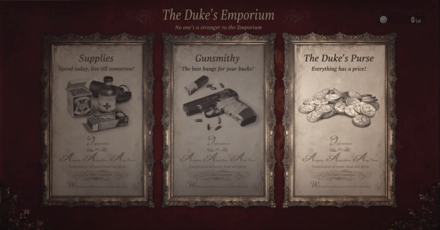 The Duke's Purse is a section of the Duke's Emporium where you can sell treasures and items in exchange for Lei. By keeping an eye out for rare items and taking down enemies or optional bosses that drop valuable crystals, you can accumulate Lei quickly thanks to your good friend the Duke.

The Duke is the only friendly face that Ethan sees consistently throughout his journey, often even giving encouraging words to him whenever they interact. The source of his wares, though unknown how exactly it is that he can even get them, is always sold quickly to Ethan whenever he acquires them.

His origins and presence in the Village are unknown, despite his knowledge of the events occurring in the area. When asked about it, The Duke answers that even he doesn't know.

At the end of the game, the Duke complains that he has lost a valuable selling site when the Village is overrun, implying that he sells his wares in several areas. This may imply a return of The Duke in the next installment of Resident Evil.

In order for us to make the best articles possible, share your corrections, opinions, and thoughts about 「The Duke Character Profile: Who Is The Merchant? | Resident Evil Village (Resident Evil 8)」 with us!