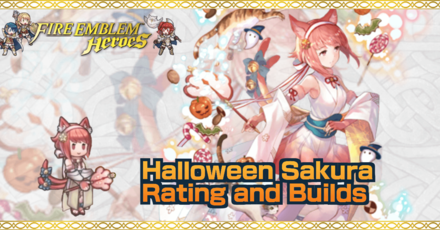 This is a ranking page for the hero Sakura - Gentle Nekomata from the game Fire Emblem Heroes (FEH). Read on to learn the best IVs (Individual Values), best builds (Inherit Skill), weapon refinement, stats at Lv 40, and more for Halloween Sakura.

The best IVs for Halloween Sakura are +Spd and -Def. She has a fair Spd stat, but a +IV will help her avoid more follow-up attacks and score more of her own. Her defenses are not that important, but since she relies on her Res to deal more damage with Glacies, she should go with a -Def IV instead.

Halloween Sakura is a ranged physical attacker (range = 2). Therefore, when not accounting for the Weapon Triangle, the amount of damage he deals will be equivalent to his Atk minus the foe's Def stat.

Guard 3 inflicts special cooldown charge -1 per attack if Halloween Sakura' HP ≥ 80% at the start of combat. This allows Halloween Sakura and her allies to take less damage from enemies. This skill is also very helpful in Grand Hero Battles where delaying enemy specials is very important as enemy specials in those maps are very powerful.

Additionally, this makes Halloween Sakura a great match-up for units running set-ups that make specials very quick to trigger such as Heavy Blade or Brave Sword as the weapon skill and slapping skills such as Flashing Blade and Quickened Pulse for quick Moonbow or Glimmer activations

Kitty Paddle+ has the rare effect of being strong against magic foes. Use this to your advantage as that is a wide variety of units that Sakura is strong against. Coupled with Guard 3, Glacies, Warding Stance 3, a colorless attribute and Sakura's decent Res stat, Sakura makes for a strong check against many magic units! This niche role is what Halloween Sakura has over other dagger units.

Sakura has decent Res and amazing tools against magic users, but if your opponent has access to a Raven tome, they can still deal a considerable amount of damage to Sakura. It might be enough so that a 2nd enemy can swoop in and finish her off. Look out for Cecilia as she has the very powerful Tome of Order, a stronger variant of a Raven tome!

Should you Unlock Potential for Halloween Sakura?

Sakura - Gentle Nekomata Only Appears as a 5 Star Hero!

Halloween Sakura as a Source Hero

Halloween Sakura can be used to inherit Kitty Paddle+ or Warding Stance 3. However, Halloween Sakura is a special hero whom you can only get from specific banners. Please think carefully before fodderring her off!

How to Get Halloween Sakura / Illustrations / Voice Actor / Quotes

How to Get Halloween Sakura

Halloween Sakura is a limited time Hero who can be pulled from a Special Heroes Summoning Event. They do not appear in regular summons.

Register as a member and get all the information you want. (It's free!)
Login
Opinions about an article or post go here.
Opinions about an article or post
We at Game8 thank you for your support.
In order for us to make the best articles possible, share your corrections, opinions, and thoughts about "Halloween Sakura Builds and Best IVs" with us!
When reporting a problem, please be as specific as possible in providing details such as what conditions the problem occurred under and what kind of effects it had.