Combat Manuals and How to Use Them | Fire Emblem Heroes

Tactics Drill Solutions
★ Out of Future Past

This page explains what Combat Manuals are and details how to use them efficiently in the game Fire Emblem Heroes (FEH). Read on if you are confused about the usage of Combat Manuals and would like to known more.

What is a Combat Manual?

A Feature For Saving Space in Your Barracks

Combat Manuals are a way for you to manage space within your barracks. It allows you to save you heroes outside of the barracks, while still having them be available as a source for Inherit Skill, Merge Allies, and Unlock Potential.

The good thing about Combat Manuals is that they do not count toward the limits of your barracks, allowing you to optimize this space much more efficiently . However, be careful because once you have created a combat manual, this hero will no longer be usable in battle.

Find it From the Allies Screen 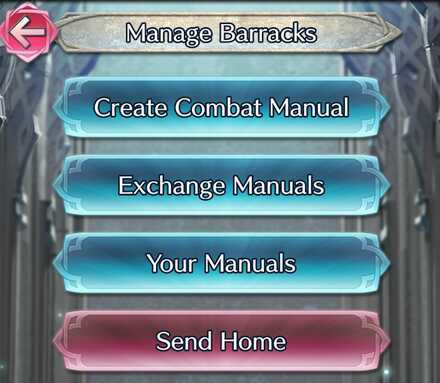 How to Use Combat Manuals Efficiently

Unless your goal is to use only lower rarity heroes, 3 Star units are generally unusable, and they are the main cause over overcrowding in your barracks. Therefore, we reccomend turning them into Combat Manuals after checking their IVs.

You should only not convert them into manuals if they do have strong IVs, and you think there is a chance you want to raise them. 4 Star heroes come with more learnable skills, so for the most part, it is totally fine to just use 3 star heroes as a source for Combat Manuals.

▼ Great for Any Units Without Good IVs

When it comes to which units you should convert into combat manuals, any units without good IVs fit this picture. They will no longer have stats or IVs once becoming a Combat Manual, so make sure you check their IVs first. Units without good IVs can still be used for Inherit Skill, Merge Allies, and Unlock Potential after converting, so there is no harm in doing so.

Unlock Potential for Several Manuals at Once 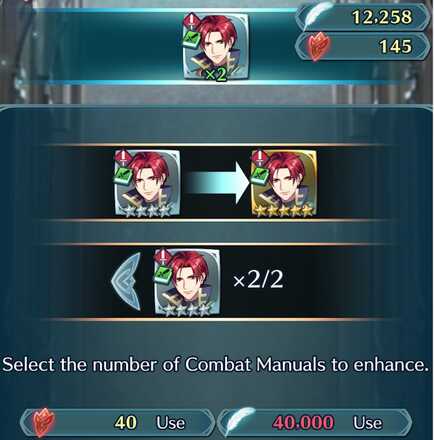 Unlike heroes in the barracks, multiple Combat Manuals can undergo Unlock Potential at the same time. This is very convenient when you wish to gain multiple useful skills from your 3 Star heroes by promoting them into 4 Star units.

Things to Note When Creating a Manual

Understand What Will Not Be Transferred 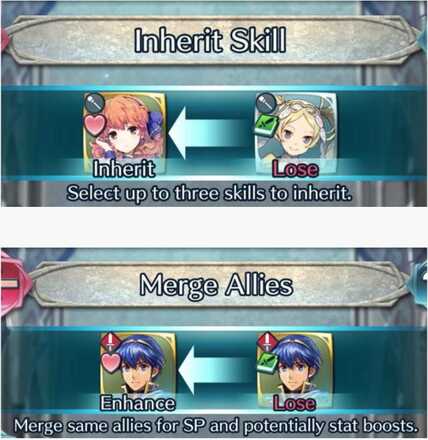 The following elements cannot be tranferred from a Combat Manual:

The elements in the previous list cannot be inherited from a Combat Manual, so use this feature wisely.

In particuarly, be very cautious when using this feature in conjunction with Merge Allies. The number of merges on a unit cannot be inherited by another unit, so turning units that you have merged into Combat Manuals will result in a total loss of the units that you used for merging. If you would like to use a unit with existing merges to merge with another ally, do not turn them into a combat manual.

Heroes converted into Combat Manuals cannot be reverted into heroes. Since you do not want to accidentally do this to a unit you are fond of, use the Favorite feature to give this hero a heart and save them.

Do Not Turn a Hero You Are Raising Into a Manual

Heroes converted into Combat Manuals will only have the function to be used as a source, and will no longer be usable in battle. Even for a hero that you have duplicates of, keep the hero with IVs that you want to raise safe in your barracks.

Combat Manuals can be used for Merge Allies, so make sure to leave the base hero you want to keep in your barracks, but you can convert ones you wish to use as merge fodder into manuals.

Create Combat Manuals allows you to manage the limited space within your barracks. Creating combat manuals is different from Send Heroes Home because you can use them as you like for Inherit Skill and Merge Allies. When your barracks start to overflow, make use of this feature and clear some room!

Register as a member and get all the information you want. (It's free!)
Login
Opinions about an article or post go here.
Opinions about an article or post
We at Game8 thank you for your support.
In order for us to make the best articles possible, share your corrections, opinions, and thoughts about "Combat Manuals and How to Use Them" with us!
When reporting a problem, please be as specific as possible in providing details such as what conditions the problem occurred under and what kind of effects it had.