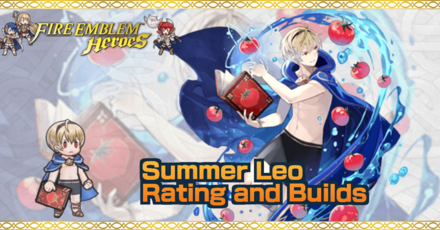 This is a ranking page for the hero Leo - Seashore's Prince from the game Fire Emblem Heroes (FEH). Read on to learn the best IVs (Individual Values), best builds (Inherit Skill), weapon refinement, stats at Lv 40, and more for Summer Leo.

The best IVs for Summer Leo are +Spd and -Def. A higher Spd stat allows Summer Leo to prevent follow-up attacks against him. His Def is really low and it is not really important for him as he is a magic wall so it is safe to take as a bane.

Summer Leo is a ranged magic attacker (range = 2). Therefore, when not accounting for the Weapon Triangle, the amount of damage he deals will be equivalent to his Atk minus the foe's Res stat.

With a Res of 35, Summer Leo sports one of the highest Res among all infantry units! If you are needing a magic wall in your all-infantry or mixed teams, we recommend that you consider Summer Leo!

Atk Ploy is a Strong Debuff

Atk Ploy 3 inflicts -5 Atk to enemies in cardinal directions if Summer Leo's Res is more than their Res. Summer Leo's Res is pretty high so the only think you need to worry about is positioning him properly in order to reduce the damage taken by your team.

Seal Res, inflicts -7 Res to foes after Summer Leo attacks them. Because the debuff is placed after Summer Leo's attack, he will be ready to finish them off in the second turn or enemy phase. If he also has magic-using allies nearby, they can take advantage of this debuff as well!

Summer Leo's Def only sits at 16 at Lv. 40. Even though he has very high Res, physical attacks make quick work of him. Pay attention to powerful blue physical attackers that can easily take down Summer Leo.

Heroes that can soak physical damage for Leo

As discussed, Summer Leo's Def is very low. It would be smart for you to pair him up with heroes that can bait and or deal with physical attackers. Some of the best options include Surtr and L!Hector as htey can also cover Leo's weakness of the blue attribute.

Heroes that calculate damage using the lower of Def or Res

Always be wary of your enemies' skills. You may think that Summer Leo will be safe when attacking dragonstone enemies as they cannot counterattack him and if ever they can, his Res is high enough to shrug off the damage from it.

This is not always the case as Distant Counter or built-in Distant Counter effects are very common amongst dragonstone builds. Many skills also pack an effect that calculates damage using the lower of Def or Res. In the case of Summer Leo, that would be lethat as that means exploiting his very low Def of 16.

Should you Unlock Potential for Summer Leo?

Leo - Seashore's Prince Only Appears as a 5 Star Hero!

Summer Leo as a Source Hero

Summer Leo can be used to inherit the skill Atk Ploy 3. However, Summer Leo is a special hero whom you can only get from certain banners. Please think carefully before fodderring him off!

How to Get Summer Leo / Illustrations / Voice Actor / Quotes

How to Get Summer Leo

Summer Leo is a limited time Hero who can be pulled from a Special Heroes Summoning Event. They do not appear in regular summons.

Register as a member and get all the information you want. (It's free!)
Login
Opinions about an article or post go here.
Opinions about an article or post
We at Game8 thank you for your support.
In order for us to make the best articles possible, share your corrections, opinions, and thoughts about "Summer Leo Builds and Best IVs" with us!
When reporting a problem, please be as specific as possible in providing details such as what conditions the problem occurred under and what kind of effects it had.