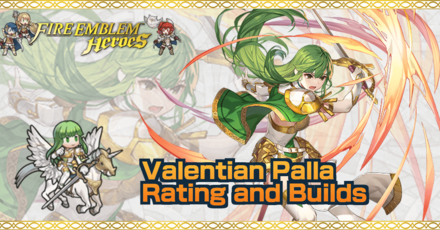 This is a ranking page for the hero Palla - Kind Eldest Beauty from the game Fire Emblem Heroes (FEH). Read on to learn the best IVs (Individual Values), best builds (Inherit Skill), weapon refinement, stats at Lv 40, and more for Valentian Palla.

The best IVs for Valentian Palla are +Atk and -Spd. A +Atk IV will effectively raise this units' ability to deal damage. As she already attacks twice and has abysmal Spd to begin with, she can take Spd as her bane.

We recommend a +Atk IV when merging Valentian Palla to 10. The insane amounts of damage she can output can potantially one-shot many units.

This is a build designed to give Valentian Palla the most points in Arena. R Duel Flying 4 will boost her BST, while Guidance will give mobility to your entire team.

This build works for Aether Raids and general use. Valentian Palla will work well in flier ball teams both in AR, hence the bond skills to boost her firepower. If Blue Flame is not available, any low cooldown Special can work such as Moonbow or Glimmer. Although if Blue Flame is not used, you can also opt to use Death Bow on the A slot and as the Sacred Seal.

Valentian Palla is a close physical attacker (range = 1). Therefore, when not accounting for the Weapon Triangle, the amount of damage she deals will be equivalent to her Atk minus the foe's Def stat.

Ladyblade is a brave adaptive weapon!

Valentian Palla is a very powerful unit, as she can attack twice regardless of who initiated the attack and also calculates damage using the lower of the enemy unit's Def or Res.

This makes her potent even against bulky units who have a high stat in Def or Res but a lower stat in the other.

Ladyblade also enables【Canto (2)】, which will allow Palla to reposition herself after combat, either retreating to safety or advancing further.

R Duel Flying 4 is a special skill that treats the unit’s stats as 175 in the Arena, allowing your overall score to increase when using Groom Saul. It is usable by any red flying unit, so equip it and increase your score as you would like, but keep in mind that as an A slot skill it means you will lose the ability to useful, powerful A skills like Fury 4 or Death Blow 4.

Because it is an upgrade from R Duel Flying 3, it also gives Atk/Spd/Def/Res +2 on top of the original +5 HP.

While R Duel Flying 4 does give some nice stats, the A skill can be home to very powerful skills that are cornerstones for great builds. If you plan to use Valentian Palla outside of the Arena, make sure to get her an A skill that allows her to perform better in maps.

Ladyblade inflicts a -5 to Spd. This accentuates her already low Spd stat. This makes it very easy to score double attacks on Valentian Palla so be wary of fast magic attackers! Additionally, it will significantly lower her damage against units with Spd-based damage reduction.

As a flying unit, Valentian Palla takes 1.5x damage from bows and weapons effective on flying units. Be sure to keep them out of the range of archers and leave them to other units.

Palla - Kind Eldest Beauty Only Appears as a 5 Star Hero!

Valentian Palla as a Source Hero

However, Valentian Palla is a very powerful unit due to her weapon and we recommend building at least 1 copy of her. Please think carefully before foddering her off!

How to Get Valentian Palla / Illustrations / Voice Actor / Quotes

How to Get Valentian Palla

Valentian Palla is a Hero who can be pulled from any summon.

Register as a member and get all the information you want. (It's free!)
Login
Opinions about an article or post go here.
Opinions about an article or post
We at Game8 thank you for your support.
In order for us to make the best articles possible, share your corrections, opinions, and thoughts about "Valentian Palla Builds and Best IVs" with us!
When reporting a problem, please be as specific as possible in providing details such as what conditions the problem occurred under and what kind of effects it had.