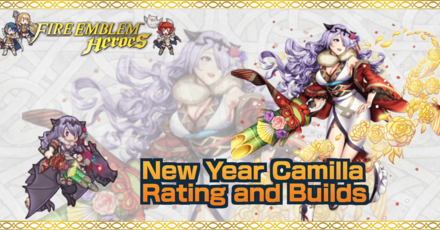 This is a ranking page for the hero Camilla - Holiday Traveler from the game Fire Emblem Heroes (FEH). Read on to learn the best IVs (Individual Values), best builds (Inherit Skill), weapon refinement, stats at Lv 40, and more for New Year Camilla.

The best IVs for NY!Camilla are +Spd and -Res. With her high Spd stat, that extra 3 points from a boon will let her gain a follow-up attack against most foes. On the other hand, her Res stat is not extremely useful, so ideally it can be used as a dump stat.

When your NY!Camilla reaches level 40, there is a bug that may cause her Spd stat to be green. The exact reason for this phenomenon is unclear, but what is known is that this does not indicate a maxed value, so if you merge duplicates of this unit you will have no problem raising her stats as usual.

NY!Camilla's strength lies in her high Def stat for a flying sword unit, so give her Iote's Shield to eliminate her weakness to bow units. By also equipping the seal Deflect Missile 3, she will have no problem enduring an attack even from a brave bow. Additionally, Swordbreaker will give her an edge when she is up against foes of the same weapon class as her.

This build uses both Wo Dao+ and Vantage. NY!Camilla’s default skill Spd/Def Bond 3 will stack with Hone/Fortify skills, making it very useful when used in conjunction with flier-only skills like Hone Fliers, etc. When you are using this unit in an all-flying team, swap out the sacred seal for Close Defense 3 or Attack +3, etc.

This build uses Firesweep Sword+ and Life and Death 3. With a Spd boon, Camilla with have 53 Atk and 43 Spd even without any merges, and she will be able to deal tons of damage to a foe without worrying about an opponent getting a counterattack. You can use Threaten Atk in the C slot to make her S skill Heavy Blade easier to trigger, but Threaten Spd is also useful for getting more follow-up attacks, as well as skills that raise your allies’ stats.

There is no special effect Weapon Refinement for Kadomatsu+, so if you do want to upgrade it, we recommend the +Spd refinement. A +Spd IV combined with this weapon refinement will give NY!Camilla a whopping 41 Spd, which will allow her to double many foes, on top of reducing the amount of follow-up attacks she takes from enemies. For more information on the best weapon to use with this unit, see the Builds section above.

NY! Camilla is a close ranged physical attacker (range = 1). Therefore, when not accounting for the Weapon Triangle, the amount of damage she deals will be equivalent to her Atk minus the foe's Def stat. In addition, she has a pretty high Def stat for a flier, as well as skills that will increase her defensive capability.

NY!Camilla is a flying unit, meaning that she has great mobility in terms of which spaces she can move to. As the amount of flying-sword users is somewhat limited, Camilla makes a great choice if this is a role you would like to have within your party.

Def/Spd are buffed if adjacent to an ally

Spd/Def Bond 3 will grant NY!Camilla Spd/Def +5 during combat if she is adjacent to an ally. Since this buff is only active during combat, it will not become the target of a foe's skill such as Panic Ploy.

As a flying unit, Camilla is prone to taking heavy damage from arrows and weapons that are effective on fliers. It is very likely that a single shot could be fatal, so make sure to play it safe and stay out of the range of archers.

Learn about Damage Calculatioins Here (Including how effective weapons work)

Should you Unlock Potential for New Year Camilla?

Camilla - Holiday Traveler Only Appears as a 5 Star Hero!

NY!Camilla can be used to inherit Spd/Def Bond 3. However, as this unit is a rare one that does not appear in regular summons, you should think carefully before using her for inherit skill.

How to Get New Year Camilla / Illustrations / Voice Actor / Quotes

How to Get New Year Camilla

New Year Camilla is a limited time Hero who can be pulled from a Special Heroes Summoning Event. They do not appear in regular summons.

Register as a member and get all the information you want. (It's free!)
Login
Opinions about an article or post go here.
Opinions about an article or post
We at Game8 thank you for your support.
In order for us to make the best articles possible, share your corrections, opinions, and thoughts about "New Year Camilla Builds and Best IVs" with us!
When reporting a problem, please be as specific as possible in providing details such as what conditions the problem occurred under and what kind of effects it had.