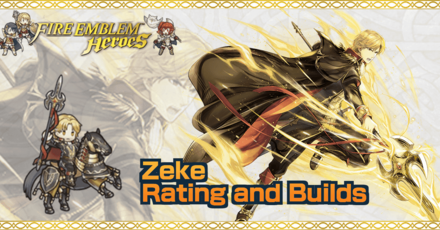 This is a ranking page for the hero Zeke - Past Unknown from the game Fire Emblem Heroes (FEH). Read on to learn the best IVs (Individual Values), best builds (Inherit Skill), weapon refinement, stats at Lv 40, and more for Zeke.

The best IVs for Zeke are +Atk and -Spd. A +Atk IV will effectively raise this units' ability to deal damage. His Spd is not important as it is very unreliable. Additionally, Holy Gradivus can guarantee him follow-up attacks so forcing Spd into his kit is not needed at all. With all that said, Spd is the ideal bane for Zeke.

We recommend a +Atk IV when merging Zeke to 10. His Atk levels combined with the guaranteed follow-up attack from Holy Gradivus that is quite easy to trigger, will allow him to attain a decent level of offensive prowess.

If you prefer a full on tank Zeke, you can also go for +Res or +Def stats depending on your needs.

This is a build designed to give Zeke the most points in the Arena while mainting his status as a good tank. Bracing Stance 3's Guard effect will stop enemy Special from triggering, while Aether will keep him healthy. You can also opt to give him the Mystic Boost 3 seal to keep him topped off and also run Blue Flame instead of Aether.

This is a build using Zeke's default skills. He works as a good tank aready and does not need a lot of investment for general use.

Zeke is a close physical attacker (range = 1). Therefore, when not accounting for the Weapon Triangle, the amount of damage he deals will be equivalent to his Atk minus the foe's Def stat.

Not only does Holy Gradivus give Zeke the Distant Counter effect, but as long as his HP is ≥ 25%, he will be able to perform a guaranteed follow-up attack.

This frees up his kit to other skills and will not need Quick Riposte 3 on either his B slot or as a Sacred Seal in order to have one-shot potential.

The former condition can be easily met because Zeke has two skills that give debuffs to the enemy team - Lull Atk/Def 3 for debuffs during combat, and Def/Res Menace for debuffs at the start of the turn.

While Zeke's weapon guarantees him a follow-up attack most of the time, he will struggle against skills that prevent this such as Null Follow-Up 3.

This greatly lowers his one-shot potential and put him in a dangerous position. Be careful of which enemy unit he engages or gets engaged with!

Zeke has low style. This makes it very easy to score double attacks on Zeke so be wary of fast magic attackers! Additionally, it will significantly lower his damage against units with Spd-based damage reduction.

This does not suggest in anyway that Zeke is squishy. He will still be very bulky regardless if he is taking follow-up attacks.

Zeke takes 1.5x damage from cavalry-effective weapons like Ridersbane or a Wolf weapon like Rauðrwolf+, and one blow from this type of weapon is sure to take him down. Make sure you know what weapons you are up against before hopping too far into the line of battle!

Zeke - Past Unknown Only Appears as a 5 Star Hero!

Zeke as a Source Hero

Zeke can be used to inherit Atk/Def Catch 4, Lull Atk/Def 3, or Def/Res Menace.

You can get Atk/Def Catch 4 and Lull Atk/Def 3 from other units, and then fodder Zeke off for Def/Res Menace.

However, due to the rarity of these skills and the fact that you cannot inherit all 3 skills off of one copy, please think carefully before foddering him off!

How to Get Zeke / Illustrations / Voice Actor / Quotes

How to Get Zeke

Zeke is a Hero who can be pulled from any summon.

Register as a member and get all the information you want. (It's free!)
Login
Opinions about an article or post go here.
Opinions about an article or post
We at Game8 thank you for your support.
In order for us to make the best articles possible, share your corrections, opinions, and thoughts about "Zeke Builds and Best IVs" with us!
When reporting a problem, please be as specific as possible in providing details such as what conditions the problem occurred under and what kind of effects it had.