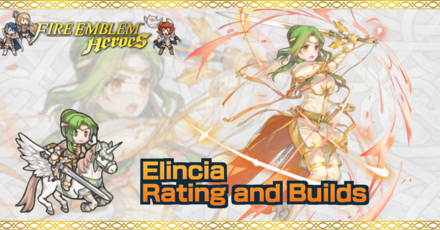 This is a ranking page for the hero Elincia - Lost Princess from the game Fire Emblem Heroes (FEH). Read on to learn the best IVs (Individual Values), best builds (Inherit Skill), weapon refinement, stats at Lv 40, and more for Elincia.

The best IVs for Elincia are +Atk and -Res. Since Elincia's weapon allows her to attack twice, increasing her Atk with a +IV improves it significantly. If you are aiming for a quad-attack build, you can opt for a +Spd IV instead.

It is worth noting that all of her defensive stats are superboons, but she unfortunately does not need them. If you are currently stuck with an Elincia with a +IV in defense, know that you are at least taking advantage of a superboon.

We recommend the Special Effect Refine for Amiti

Amiti's special refinement adds an effect identical to Swift Sparrow 2. This makes Elincia a very powerful player phase hero as it opens up the opportunity for quad-attacks if ever she is able to stack enough Spd.
Weapon Refinery Tier List

Elincia is a close physical attacker (range = 1). Therefore, when not accounting for the Weapon Triangle, the amount of damage she deals will be equivalent to her Atk minus the foe's Def stat.

Amiti allows Elincia to attack twice if she initiates combat. It inflicts -2 Spd, to her but that is easily mitigated by the special effect refine for this weapon. If Elincia is in an all-flying team and Hone Fliers and Goad Fliers are active, she makes for a very powerful player-phase unit.

Additionally, her special effect refine gives her the window of opportunity to aim for quad-attacks. Consider increasing Elincia's Spd through, merges, dragonflowers, skills and other buffs if you are interested in a quad-attack build.

Elincia has access to the skill Death Blow 3 which grants her +6 Atk everytime she initiates combat. Because she attacks twice when initiating, this effectively grants her +12 Atk. This makes her a powerful player phase unit.

Flier Formation 3 allows Elincia to move to spaces that are adjacent to units 2 squares away. This allows Elincia to potentially jump from unit to unit and help them through attacking nearby foes or by triggering skills that require an adjacent ally. This skill provides lots of strategic value if you are using at least two other flying units aside from Elincia.

As a flying unit, Elincia takes 1.5x damage from bows and weapons effective on flying units. Be sure to keep them out of the range of archers and leave them to other units.
Heroes with Effective Skills

Vantage is a Direct Counter

Elincia boasts high firepower but this comes at the cost of having very low defenses. If enemies have Vantage 3 ready to activate, she will be defenseless and unable to attack. If you plan to use Elincia in competitive modes like Arena and Aether Raids, you may want to consider slapping a Hardy Bearing 3 Sacred Seal onto her.

Elincia's Counters are Common in the Arena

Red flyers like Elincia have generally many counters. This is specially prevalent in the Arena where a lot of bow characters and high-powered blue mages like Reinhardt and Ophelia are present. Even B!Ike who is a green unit will give Elincia a hard time with Urvan and Steady Breath. We recommend investing in Elincia with skills before using her in competitive game modes.

Should you Unlock Potential for Elincia?

Elincia - Lost Princess Only Appears as a 5 Star Hero!

Elincia as a Source Hero

Elincia can be used to inherit the skill Flier Formation 3. [red]However, Elincia is a powerful player-phase attacker. Think carefully before you fodder off Elincia for this skill.

How to Get Resplendent Elincia / Illustrations / Quotes

How to Get Resplendent Elincia

Resplendent Elincia can be obtained by buying a FEH Pass. After the distribution period has ended, they can also be purchased by FEH pass subscribers.

How to Get Elincia / Illustrations / Voice Actor / Quotes

Elincia is a Hero who can be pulled from any summon.

Register as a member and get all the information you want. (It's free!)
Login
Opinions about an article or post go here.
Opinions about an article or post
We at Game8 thank you for your support.
In order for us to make the best articles possible, share your corrections, opinions, and thoughts about "Elincia Builds and Best IVs" with us!
When reporting a problem, please be as specific as possible in providing details such as what conditions the problem occurred under and what kind of effects it had.