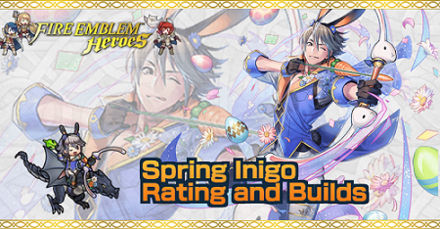 This is a ranking page for the hero Inigo - Festival Flower from the game Fire Emblem Heroes (FEH). Read on to learn the best IVs (Individual Values), best builds (Inherit Skill), weapon refinement, stats at Lv 40, and more for Spring Inigo.

The best IVs for Spring Inigo are +Spd and -Res. A higher Spd stat allows Spring Inigo to get a ton of follow-up attacks on his foes. Additionally, his Spd is a superboon so you should take advantage of that as much as possible. His Res is of less importance and thus safe to be taken as a bane. Be warned though as it is a superbane. Get a merge on him if you can!

We recommend a +Spd IV when merging Spring Inigo to 10. It is best to aim for follow-up attacks to increase his offensive ability as his Atk is already high. If you prefer relying on skills to increase Inigo's Spd, you can go for a +Atk IV instead.

In this more expensive build, we move Aerobatics 3 to the B slot because Mystic Boost 3 is a lot cheaper in the S slot. The latter will counteract the HP deduction from Atk/Spd Push 3 and will neutralize adaptive damage. The B slot is very flexible so change it depending on your needs

Moonbow is picked up for a very reliable, low-cooldown special, Desperation 3 is picked up to pick out those one-sided matchups, and Aerobatics 3 Sacred Seal is picked up for utility, though you can take any Seal you prefer. You can also swap out G Duel Flying 4 for something else if you prefer, say Atk/Spd Push 4.

Spring Inigo's weapon cannot currently be refined. This section will be updated if it becomes refineable in the future!

Spring Inigo is a ranged physical attacker (range = 2). Therefore, when not accounting for the Weapon Triangle, the amount of damage he deals will be equivalent to his Atk minus the foe's Def stat.

Inigo's weapon grants him Atk/Spd+5 and will also neutralize any debuffs inflicted on those same stats during combat provided that foe's HP ≥ 75%.

This means that Inigo not only can he take down fliers due to his weapon being effective against them, but he can attack without fear of his damage being nerfed by skills like Lull Atk/Spd 3 or Spd Ploy 3.

G Duel Flying 4 is a special skill that treats the unit’s stats as 175 in the Arena, allowing your overall score to increase when using her. It is usable by any green flying unit, so equip it and increase your score as you would like, but keep in mind that as an A slot skill it means you will lose the ability to useful, powerful A skills like Fury 4 or Atk/Spd Solo 4.

Because it is an upgrade from G Duel Flying 3, it also gives Atk/Spd/Def/Res +2 on top of the original +5 HP.

Can create a decent Atk/Spd gap as a support unit!

You can run Spring Inigo as a support unit and allow your allies to deal more damage and take less damage from enemies. This is all thanks to:

This potentially creates a +10 Atk/Spd gap between an ally and enemy foes! This is a great window of opportunity that can land your team the win because of more follow-up attacks and the decreased number of hostile follow-up attacks.

If you can afford it, you can inherit a ruse skill like Atk/Spd Ruse 3. This will further the Atk/Spd gap Inigo can create. Although as of 2021, this skill can only be obtained from units that already have a similar role, so you can go for other B skills instead.

Atk/Spd Ruse 3 also inflicts Guard on the foe, slowing their Special activations. When you get a great Ruse activation with Azelle, it can really provide your team with a window of opportunity to charge in and take many foes out.

While G Duel Flying 4 does give some nice stats, the A skill can be home to very powerful skills that are cornerstones for great builds. If you plan to use Spring Inigo outside of the Arena, make sure to get him an A skill that allows him to perform better in combat.

As a flying unit, Spring Inigo takes 1.5x damage from bows and weapons effective on flying units. Be sure to keep them out of the range of archers and leave them to other units.
Heroes with Effective Skills

With only 24 Def and 29 Res at Lvl. 40, Spring Inigo is susceptible to both physical and magical attacks.

Be careful and move him out of range of any enemy units when he attacks!

Should you Unlock Potential for Spring Inigo?

Inigo - Festival Flower Only Appears as a 5 Star Hero!

Spring Inigo as a Source Hero

All of Spring Inigo's skills have inheritance value

All of Spring Inigo's Skills have inheritance value. Lots of teams can make use of Rally Atk/Spd+, and Atk/Spd Rein 3. Springy Bow+, and G Duel Flying 4 on the other hand can be very useful in niche situations. Be warned as Spring Inigo is a Special hero whom you can only get from specific banners. Please think carefully before fodderring him off.

How to Get Spring Inigo / Illustrations / Voice Actor / Quotes

How to Get Spring Inigo

Spring Inigo is a limited time Hero who can be pulled from a Special Heroes Summoning Event. They do not appear in regular summons.

Register as a member and get all the information you want. (It's free!)
Login
Opinions about an article or post go here.
Opinions about an article or post
We at Game8 thank you for your support.
In order for us to make the best articles possible, share your corrections, opinions, and thoughts about "Spring Inigo Builds and Best IVs" with us!
When reporting a problem, please be as specific as possible in providing details such as what conditions the problem occurred under and what kind of effects it had.