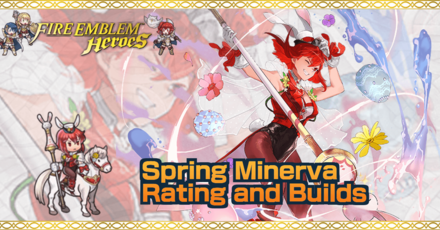 This is a ranking page for the hero Minerva - Verdant Dragoon from the game Fire Emblem Heroes (FEH). Read on to learn the best IVs (Individual Values), best builds (Inherit Skill), weapon refinement, stats at Lv 40, and more for Spring Minerva.

The best IVs for Spring Minerva are +Spd and -Res. A higher Spd stat allows Spring Minerva to get a ton of follow-up attacks on her foes. Additionally, er Spd is a superboon so you should take advantage of that as much as possible. Her Res is of less importance and thus safe to be taken as a bane. Be warned though as it is a superbane. Get a merge on her if you can!

We recommend a +Spd IV when merging Spring Minerva to 10. It is best to aim for follow-up attacks to increase her offensive ability as her Atk combined with her Atk buffs is already high. If you prefer relying on skills and/or support to increase Minerva's Spd, you can go for a +Atk IV instead.

This is a premium set-up for Spring Minerva. This is a lot more expensive compared to the budget counterpart! You can also run Desperation with this build, if you like Desperation setups.

In addition to the standard Reposition, Desperation 3, and Atk/Spd Solo 3 Sacred Seal*

Spring Minerva's weapon cannot currently be refined. This section will be updated if it becomes refineable in the future!

Spring Minerva is a close physical attacker (range = 1). Therefore, when not accounting for the Weapon Triangle, the amount of damage she deals will be equivalent to her Atk minus the foe's Def stat.

Spring Minerva's weapon grants her Atk/Spd+5 and will also neutralize any debuffs inflicted on those same stats during combat provided that foe's HP ≥ 75%.

This means that Minerva can attack without fear of her damage being nerfed by skills like Lull Atk/Spd 3 or Spd Ploy 3.

Atk/Def Solo 3 grants Spring Minerva +6 Atk/Def during combat when she enters a fight without adjacent allies. This skill can be hard to take advantage of in smaller maps or maps with lots of units like Rival Domains, but it is perfectly convenient in normal maps. If you are not fond of being restricted by the trigger condition, you can choose to inherit Death Blow 3 or Life and Death 3 onto Minerva instead.

Team gets an Atk boost on Odd-numbered turns

Spring Minerva's default C skill Odd Atk Wave 3 will grant Minerva and adjacent allies Atk+6 on odd-numbered turns. Since this C skill actually gives the bonus to Spring Minerva and not just her allies, the combined effect of this skill, Springy Lance+, and Atk/Def Solo 3 give Tibarn +17 Atk +6 Def when entering combat unadjacent to allies.

Spring Minerva takes 1.5x damage from cavalry-effective weapons like Ridersbane or a Wolf weapon like Rauðrwolf+, and one blow from this type of weapon is sure to take him/her down. Make sure you know what weapons you are up against before hopping too far into the line of battle!

Weak to Magic Due to Low Res

With only 18 Res at lvl 40, Spring Minerva is extremely vulnerable against any unit using magic.

Be careful and move her out of range of any enemy magic users when she attacks!

Should you Unlock Potential for Spring Minerva?

Spring Minerva as a Source Hero

Spring Minerva can be used to inherit Springy Lance+ or Odd Atk Wave 3. However, Spring Minerva is a special hero that can provide some power for your cavalry lineups. Please think carefully before fodderring her off.

How to Get Spring Minerva / Illustrations / Voice Actor / Quotes

How to Get Spring Minerva

Spring Minerva is a limited time Hero who can be pulled from a Special Heroes Summoning Event. They do not appear in regular summons.

All of these articles are trash. Speed on her? Are you fucking serious?! Why wouldn't I just do +Atk IV on her, especially on a +10 merge? Don't make me laugh with this stupid speed bias. She's not outspeeding any myrms or mage with that awful speed. Almost all the merges give speed IV a 5 star rating. This needs to stop. Speed is not that important in this game. There are other stats worth looking into.

Register as a member and get all the information you want. (It's free!)
Login
Opinions about an article or post go here.
Opinions about an article or post
We at Game8 thank you for your support.
In order for us to make the best articles possible, share your corrections, opinions, and thoughts about "Spring Minerva Builds and Best IVs" with us!
When reporting a problem, please be as specific as possible in providing details such as what conditions the problem occurred under and what kind of effects it had.