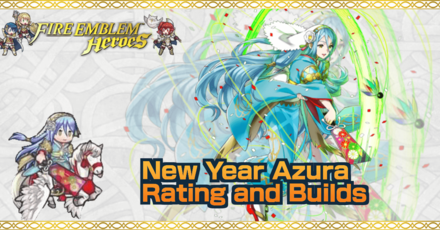 This is a ranking page for the hero Azura - Celebratory Spirit from the game Fire Emblem Heroes (FEH). Read on to learn the best IVs (Individual Values), best builds (Inherit Skill), weapon refinement, stats at Lv 40, and more for New Year Azura.

Azura's best IVs are +Spd and -Res. Having an increased Spd will increase her survivability by making her less susceptible to follow-up attacks, allowing her to continue supporting her allies. To maintain a balance in her defensive stats, a -Res stat is ideal.

This is a skillset made for battling at a class advantage, and increasing that power. By giving her the skill Emerald Axe, you can completely leave it to Azura to take out powerful blue mages like Reinhardt. Distant Counter is the ideal Passive A slot, but if you do not have the source hero for this investment, stat boosting skills like Fury 3 or Speed+3 are some other options.

This skillset aims to use as little skill inheritance as possible. Azura can inherit Drive Def 2 to increase Hagoita+’s effects and grant Def+5 to allies within 2 spaces. Furthermore, equipping Earth Dance will enhance this Def buff to +10 after using Sing on her allies. Giving her Triangle Adept will allow her to become the party’s designated blue unit slayer.

There is no special effect Weapon Refinement for Hagoita+, so if you do want to upgrade it, we recommend the +Spd refinement. A +Spd IV combined with this weapon refinement will give Azura a whopping 41 Spd, which will allow her to double many foes, on top of reducing the amount of follow-up attacks she takes from enemies. However, you may also prefer to give her a different weapon skill, such as Emerald Axe+.

New Year's Azura is a close ranged physical attacker (range = 1). Therefore, when not accounting for the Weapon Triangle, the amount of damage she deals will be equivalent to her Atk minus the foe's Def stat. In addition, she has an assist skill that can gratn additional movement to allies who have completed their turn.

A flying hero with a refresher assist!

Azura is one of the few flying units with a sing/dance assist. Flying units can travel through forests and over water, making her an even more useful support unit than an infantry Azura.

Grants a defense buff to allies when using Sing

Her default B skill Earth Dance gives Def+5 to allies when she grants them additional movement. This will stack on top of buffs that are only active in battle, meaning that it will work together with the effect of her weapon Haoita+, and her allies will gain a total of Def+7 when attacking within two spaces of her.

Increases the firepower of allied fliers

With her flying-exclusive C skill Hone Fliers, Azura can grant Atk/Spd+6 to allied fliers. This makes using her in an all-flying party very easy to take advantage of.

As a flying unit, Azura will take heavy damage from bows and other skills that are effective on flying units. Make sure you keep her out of the range of any bow wielding units.

Should you Unlock Potential for New Year Azura?

Azura - Celebratory Spirit Only Appears as a 5 Star Hero!

New Year's Azura can be used to inherit Hone Fliers. However, as she is a very useful flying unit with a refresher skill, we recommend you at least keep one Azura and raise her before foddering any duplicates off.

How to Get New Year Azura / Illustrations / Voice Actor / Quotes

How to Get New Year Azura

New Year Azura is a limited time Hero who can be pulled from a Special Heroes Summoning Event. They do not appear in regular summons.

Register as a member and get all the information you want. (It's free!)
Login
Opinions about an article or post go here.
Opinions about an article or post
We at Game8 thank you for your support.
In order for us to make the best articles possible, share your corrections, opinions, and thoughts about "New Year Azura Builds and Best IVs" with us!
When reporting a problem, please be as specific as possible in providing details such as what conditions the problem occurred under and what kind of effects it had.