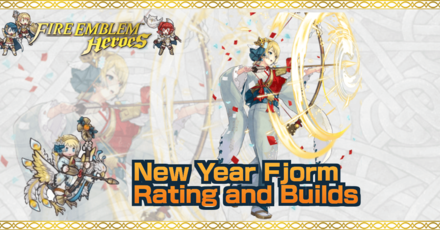 This is a ranking page for the hero Fjorm - New Traditions from the game Fire Emblem Heroes (FEH). Read on to learn the best IVs (Individual Values), best builds (Inherit Skill), weapon refinement, stats at Lv 40, and more for New Year Fjorm.

The best IVs for New Year Fjorm are +Spd and -Res. A higher Spd stat allows New Year Fjorm to get a ton of follow-up attacks on her foes. It also protects her from hostile follow-up attacks. Her Def and Res are both low at 20 and 21 respectively, but since her Res is slightly higher and it can be supplemented through her C skill, you should take it as her bane as balanced defenses are ideal for survival.

We recommend a +Spd IV when merging New Year Fjorm to 10. This is for the same reasons as above. With this IV, she will reach 42 Spd which is at a level wherein she can score follow-up attacks if she has ample support from allies.

New Year Fjorm is a ranged physical attacker (range = 2). Therefore, when not accounting for the Weapon Triangle, the amount of damage she deals will be equivalent to her Atk minus the foe's Def stat.

Kabura Ya+ grants an effect identical to Chill Spd 3. It inflicts -7 Spd on the fastest enemy unit. This is very important, as it makes one of the most powerful offensive enemy units in the map less likely to execute follow-up attacks. Take note that the effect is applied at the start of every turn and it wears of after the units' next action! This means that if the enemy receives a refresh-assist skill, the penalty will wear off the next action. This potentially allows the unit to score follow-up attacks on your team.

Another quirk of Kabura Ya+ is that it affects the enemy unit regardless of where Fjorm is. It only lasts until the affected units' next action so the Spd debuff will not be present if the enemy receives a refresher-assist skill.

Atk/Spd Bond 3 increases New Year Fjorm's Atk and Spd by +5 if she is adjacent to an ally. Since it is an in-combat buff, it stacks with other combat buffs, and of course with the effects of Atk/Spd Link 3. Togehther with mentioned skill and the effects of Kabura Ya+, Fjorm can ensure that she and her team mates can get a massive Spd advantage over the enemy team.

Fling Allies into Combat and Buff Them Simultaneously!

Atk/Spd Link 3 buffs New Year Fjorm and any ally who uses a movement-assist skill or receives one from Fjorm by +6 Atk/Spd. Since Summer Joshua has access to Reposition, she can make use of this skill to fling an ally into battle or grab them out of the danger zone while providing them with buffs.

Any allied unit can also use something like Shove onto Fjorm to get superior positioning and then wreck the enemy team with the Atk/Spd buffs! If you utilize something like Drag Back, she will still be in Atk/Spd Bond range without making adjustments.

New Year Fjorm's Def and Res sit at only 20 and 21 respectively. This makes her extremely fragile. Keep in mind that Even Res Wave 3 provides Res bonuses in even-numbered phases so take advantage of that!

As a flying unit, New Year Fjorm takes 1.5x damage from bows and weapons effective on flying units. Be sure to keep them out of the range of archers and leave them to other units.

Fjorm - New Traditions Only Appears as a 5 Star Hero!

Inheriting Kabura Ya+ or Atk/Spd Bond 3

New Year Fjorm can be used to inherit either the skills Kabura Ya+ or Atk/Spd Bond 3. Take note that New Year Fjorm is a special hero whom has the rare attribute of being a flying green bow unit! We recommend against fodderring her off as she can fill some very specific niches in your team.

How to Get New Year Fjorm / Illustrations / Voice Actor / Quotes

How to Get New Year Fjorm

New Year Fjorm is a limited time Hero who can be pulled from a Special Heroes Summoning Event. They do not appear in regular summons.

Register as a member and get all the information you want. (It's free!)
Login
Opinions about an article or post go here.
Opinions about an article or post
We at Game8 thank you for your support.
In order for us to make the best articles possible, share your corrections, opinions, and thoughts about "New Year Fjorm Builds and Best IVs" with us!
When reporting a problem, please be as specific as possible in providing details such as what conditions the problem occurred under and what kind of effects it had.