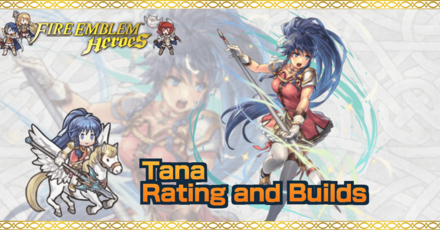 This is a ranking page for the hero Tana - Winged Princess from the game Fire Emblem Heroes (FEH). Read on to learn the best IVs (Individual Values), best builds (Inherit Skill), weapon refinement, stats at Lv 40, and more for Tana.

The best IVs for Tana are +Spd and -HP. A +Spd IV on Tana will put her Spd to 39 at Lv. 40. This allows Tana to receive less follow-ups and score more follow-up attacks on her own. Being less susceptible to follow-up attacks works well with Vidofnir's +7 Def when being attacked in the enemy phase by specific units as they both provide for some physical bulk. Her HP is of less importance for her and it is safe to take as a bane.

We recommend the Special Effect Refine for Vidofnir

Vidofnir widens the range of Tana's defenses in the enemy phase from granting +7 Def to lance, axe and sword units to all melee units including a +7 Res against dragonstones.

It also grants +4 Atk/Spd to Tana in combat if she is within 2 spaces of an infantry or armored ally. This works well with Guidance 3 as it further strengthens her role in mixed teams. However, this makes Tana a bit weaker in all-flying teams as she would not get this bonus.

Tana is a close physical attacker (range = 1). Therefore, when not accounting for the Weapon Triangle, the amount of damage she deals will be equivalent to her Atk minus the foe's Def stat.

Guidance 3 allows infantry and armored allies move to an adjacent space to Tana if they are within 2 spaces of her. This allows armored units to potentially move up to 3 spaces in one turn!

Vidofnir has an effect similar to Close Def

Vidofnir grants bonus defenses in the enemy phase especially when upgraded. This makes Tana quite tanky except against bows. It is similar to Close Def 3 except that it does not provide a bonus to Res to protect from dragonstone units.

It's effect can be enhanced to surpass Close Def's effects. Check it out here!

Moonbow is a hard-hitting, but low-cooldown special skill that Tana possesses. It has high utility and fits well in many skillsets. It is a go-to special skill that many heroes would want on their skillsets and Tana is very lucky to have native access to it.

As a flying unit, Tana takes 1.5x damage from bows and weapons effective on flying units. Be sure to keep them out of the range of archers and leave them to other units.
Heroes with Effective Skills

Should you Unlock Potential for Tana?

Tana - Winged Princess Only Appears as a 5 Star Hero!

Tana as a Source Hero

Tana can be used to inherit the skill Guidance 3. Take note that Guidance 3 is available as a Sacred Seal. Only Inherit Guidance 3 from another unit if you would want to use the Seal slot for something else.

How to Get Tana / Illustrations / Voice Actor / Quotes

How to Get Tana

Tana is a Hero who can be pulled from any summon.

Register as a member and get all the information you want. (It's free!)
Login
Opinions about an article or post go here.
Opinions about an article or post
We at Game8 thank you for your support.
In order for us to make the best articles possible, share your corrections, opinions, and thoughts about "Tana Builds and Best IVs" with us!
When reporting a problem, please be as specific as possible in providing details such as what conditions the problem occurred under and what kind of effects it had.