This is a tier list of the best blue units in Fire Emblem Heroes (FEH). Every hero listed on this page is a top tier hero, so if you are curious about which blue heroes to use, or who is the strongest blue unit, please read on.

Note: Heroes who primarily act as dancers were excluded from this list.

New Year Alfonse's exclusive weapon Imbued Koma makes it very easy for Alfonse's special to trigger, and on top of that, it can nullify enemy follow-up attacks. He gains a massive +5 to all stats when his special is ready, and thanks to his Duo Skill, he can achieve this at any time. Alfonse has the power to quickly recharge his special and stay buffed while inflicting massive damage to foes while recovering HP.

Brave Hector is an armored unit whose exclusive weapon skill allows him to counterattack ranged attacks. On top of his extremely high resilience, Hector gains guaranteed follow-up attacks regardless of who attacks first. This makes him work fantastically both defensively and offensively.

Recently, Brave Hector received a very powerful special refinement effect. It improved his overall performance in both phases as it inflicts -6 Atk/Def on them and blocks their ability to score follow-up attacks on Hector. It is a pretty simple upgrade, but considering that this triggers in both phases and Brave Hector is already a solid dual-phase unit without it, you can see why this recent upgrade is enough to power him through to this top spot on the tier list.

Brave Dimitri is a powerful hero in both defensive and offensive ends. The combo of Moon Gradivus and Noontime grants him massive durability and sustain as the weapon accelerates special cooldown charge and grants Distant Counter. This works well with Atk/Def Unity which neutralizes and converts Atk/Def penalities into bonuses on top of a fixed bonus. Finally, Blue Lion Rule makes good use of Dimitri's huge Def pool as it grants him an extra ability to reduce damage by stacking Def similar to Repel and Close Call.

Legendary Chrom is a horrible sight to see in the Arena. When he is in the opposing team, you are most likely to see one of your units taken out by him. Using his weapon and Lull Atk/Def 3, he will lower the Atk/Def stats of your units. He can also deal with your melee units as his base kit includes Close Counter. What makes him unique is his assist skill, To Change Fate!, which is a movement-assist skill that he can use to reposition his allies, but at the same time it also allows him to attack after using it. This ensures his presence in the battlefield is well-felt by both enemies and allies alike.

L! Julia is a very powerful Legendary Hero. Her exclusive weapon Virtuous Naga is effective on dragons and will grants her Atk/Res+6 in combat when her Atk is higher than the foe's. Her B skill Light and Dark inflicts -2 to all stats on a foe and nullifies their bonuses, making Vitruous Naga even easier to trigger. This will allow her to pretty much OHKO any dragon unit or foe with low Res.

Fallen Corrin (M) gets a lot of buffs from his skills when just by being not adjacent to any allies. He can get a total of +12 Spd, +18 Def +11 Res +5 Atk if the said condition is met. That is quite the buff, and its easy to activate. The bonuses from his C skill is calculated at the start of the turn so make sure no allies are adjacent to him even at the start of the turn. The other 2 sources, his weapon skill and A skill are only concerned when allies are not near upon entering combat. On top of that huge buff, he has Null Follow-Up 3 that makes him even more of a threat. His ease of use and overall presence as a dual-phase unit is what makes him a great unit.

Duo Ephraim is a duo armored unit with a very powerful duo skill. His duo skill will allow him and allied infantry/armor within two spaces to move an extra space. His weapon skill Reginleif is effective on armored units, and it also gives him a guaranteed follow-up attack when his Atk exceeds that of the foe or when he is granted extra movement. The synergy between his default skills is great, and the ability to move additional spaces and gain guaranteed follow-up attacks makes him a powerful blue unit.

Legendary Tiki is a powerful armored unit with extremely high stats. Being a manakete, she is a magic attacker with access to dragon-only buffs. Additionally, the skills she comes equipped with when summoned are all very strong, making her an immediate asset to your team. Her weapon skill is effective on dragons and allows her to counterattack regardless of range. Bold Fighter will also grant her guaranteed follow-up attacks, so she can easily OHKO her foes. 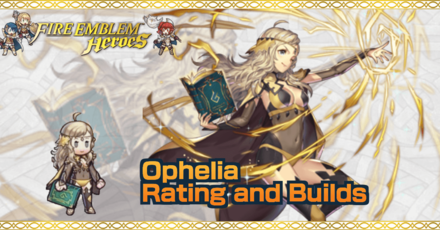 Rating and Recommended Builds for Ophelia

Having Ophelia inherit the skill Special Spiral makes her one powerful nuke. Using Special Spiral to trigger her area-damaging special can make her even more useful than Reinhardt in certain situations. She is strong enough to easily take down even very high Res heroes such as Sigurd.

Reinhardt is an extremely high powered blue tome-wielding cavalry unit whose exclusive weapon Dire Thunder allows for consecutive attacks. His Atk is already incredibly high, but giving him the skill Death Blow or some other buff will generally allow him to OHKO almost any hero. Reinhardt can be pulled at low rarities, so if you are able to summon him be sure to make leveling and promoting him a priority.

Rudolf is a very strong armored unit with an excellent exclusive weapon skill. This weapon, Thorn Lance, will lower a foe's Atk/Def while preventing a follow-up attack. He can severely limit the amount of damage a foe is capable of putting out, while also using Threat. Atk/Def to make it even easier to take his enemies down. If you are looking for a strong blue tank for your team, don't look past Rudolf!

Young Palla is an excellent flying ace that has access to a duo skill which improves the mobility of her party. It allows her and all adjacent flying allies to move 1 space extra for that turn. Additionally, she packs a punch offensively as attacking in the player phase allows her to get major offensive bonuses.

Naga is a flying dragon unit who is very strong against other dragons. Her weapon skill Divine Breath is effective against dragons, If there are dragon allies or allies with dragon-effective weapons within two spaces of Naga, she can gain up to +9 in all stats. Her C skill Divine Fang also grants effective on dragons to nearby allies, making her bonuses very easy to trigger.

Brave Lucina becomes very powerful with a Special Effect Weapon Refine on her exclusive weapon. Upgrading Geirskögul will grant Def/Res+3 to allied physical attackers within 2 spaces during combat, special cooldown charge +1 per attack to those allies when the foe initiates combat. Upgrading through the weapon refinery will also make her weapon effective on dragons, giving her a powerful boost as well.

Register as a member and get all the information you want. (It's free!)
Login
Opinions about an article or post go here.
Opinions about an article or post
We at Game8 thank you for your support.
In order for us to make the best articles possible, share your corrections, opinions, and thoughts about "Best Blue Units Tier List" with us!
When reporting a problem, please be as specific as possible in providing details such as what conditions the problem occurred under and what kind of effects it had.