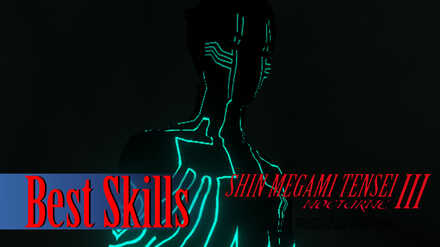 This is Game8's Best Skills guide for Shin Megami Tensei 3: Nocturne HD Remaster (SMT Nocturne). Read on to know the best physical skills, the best magical skills, and the best skills for the Demi-Fiend!

The Skills listed below are skills we consider to be essential or highly useful to players of any build and roster.

Sacrifice for Final Damage Before Dying

Sacrifice is a perfect last resort for a dying Demon you can't/ won't heal or consider disposable.This skill is way better than Last Resort simply because it doesn't damage your team.

Mahamaon and Mamudoon are great one turn enemy team wipers (provided that the enemies are non-resistant to Light or Dark). They are niche solutions, but are also devastating in those niche situations.

Preach for Mind Damage and Ailments

Preach is a Mind damage attack against the whole enemy party. Not only is Mind resistance a bit uncommon, but the chance for Ailment effects is a sweet bonus.

Wind Cutter for Most Bosses with Resistances

Wind Cutter is an extremely devastating skill. We highly recommend it, from mid-game to late-game, as there are not many Bosses that negate Force. This skill, paired up with Force Boost, makes quick work of many bosses.

Evil Melody can become a best skill in dungeons with enemies with high VIT and high resistances. With a mana cost of 1 MP, this gimmicky skill can become very useful on specific situations.

Focus is a perfect skill for Demons with a high STR stat, including yourself. You can use this skill for one strong Phys Demon, then make your other Demons buff your damage even further or weaken the enemy to kill them in one hit.

Null: Light and Null: Dark are perfect insurances against one hit Light and Dark skills, like Hama and Mudo.

Dark Might is a great Skill to have against Boss Battle Demons. Just run around and wait for a New Kagutsuchi then enter the fight, assured critical hits for Demons who have this skill equipped.

Life Refill and Mana Refill are great skills to have to conserve Macca, Items, and MP. Pair it with Estoma while exploring and you'll have a healthy party all around.

Drain and Attack for HP and Damage

Drain Attack is very useful when paired with Attack All, perfect for Demons who tank damage while Physically dealing it.

Analyze might be a basic skill, but many players forget it's essential for exploiting the bonuses of the Press Turn Battle System. It also gives you a reading on how to easily defeat a demon and avoid damage.

Beseech is one of many negotiation skills available, what makes it part of this list is because of how early it can be learned and be inherited.

Detain might look like it's just eating skill space, but when you find a demon you really want to recruit, then just goes away after swindling you of precious Macca and Items, the necessity of this skill becomes more apparent.

Posumudi is essential for curing poisoned Physical fighers, since it halves the damage they deal while killing them slowly.

Media is special, since you can get it early through Ame-no-Uzume and Ankh.

Estoma, Riberama, and Liftoma are all necessary if you want to be able to move in maps freely and with purpose.

General Best Skills for the Demi-Fiend

Post (0 Comments)
Opinions about an article or post go here.
Opinions about an article or post
We at Game8 thank you for your support.
In order for us to make the best articles possible, share your corrections, opinions, and thoughts about "Best Skills List: Best Demi-Fiend Skills" with us!
When reporting a problem, please be as specific as possible in providing details such as what conditions the problem occurred under and what kind of effects it had.