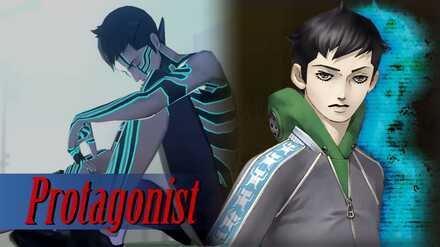 This is a profile page for the Protagonist (Demi-Fiend) from the game Shin Megami Tensei III HD Remaster (SMT Nocturne) releasing for the Switch, PS4, and Steam. Read on to learn more about this character's backstory, characteristics, and remaster voice actor/actress. 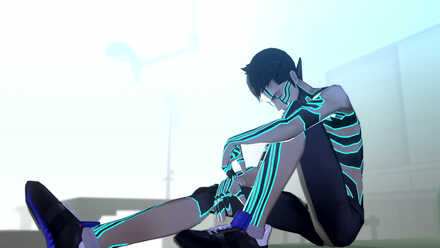 The Protagonist is the player-controlled, player-named character in Shin Megami Tensei III: Nocturne.

Described as an average Tokyo high-schooler, the Protagonist is entangled in the sequence of events that lead up to the destruction of Tokyo. His fateful visit to the Shinjuku Medical Center allows him to become one of the few humans that survive the Conception.

The Protagonist awakens to the Vortex World as a changed being. Once human, he is now the Demi-Fiend - half human and half demon. Charged by his late teacher Yuko Takao to find answers, he must journey through a warped Tokyo in search of the truth about the Conception and his transformation.

The Protagonist is a unique character that can be strengthened and built differently by using different kind of magatamas and by allocating stat points to different stats. Check our Demi-Fiend build guide to learn how to best setup the Demi-fiend for success!

The Protagonist's name is actually not revealed in the game. There are some sources from other materials that are related to Nocturne that gives him names. For A list of all his Canon Name suggestions or if you're just looking for a funny name for the Protagonist, see our name suggestion guide!

Best Name for the Demi-Fiend

Post (0 Comments)
Opinions about an article or post go here.
Opinions about an article or post
We at Game8 thank you for your support.
In order for us to make the best articles possible, share your corrections, opinions, and thoughts about "Protagonist (Demi-Fiend) Character Profile & Voice Actor" with us!
When reporting a problem, please be as specific as possible in providing details such as what conditions the problem occurred under and what kind of effects it had.