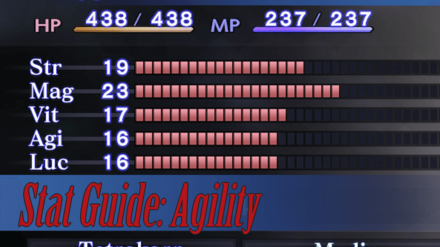 This is a guide to the Agility (Agi) Stat in Shin Megami Tensei III HD Remaster (SMT Nocturne) for the Switch, PS4, and Steam! Read on to learn what is Agility, what is the effect of Agility, and should you raise your agility stat.

What Does Agility Do?

The Agility stat affects the Demi-Fiend's chance to hit attacks and his turn order during battle.

A higher Agility number means that attacks will hit more often, and that the Demi-Fiend will have a high chance of being the first to take his turn during battle.

For example, if the Demi-Fiend has 10 Agi and the rest of his party members have 9, he will always have the first turn in battle.

How To Raise Agility

The Agility stat can be raised by spending skill points when the Demi-Fiend levels up. Sometimes, when a magatama acts violently during a level up, it can even grant you a random bonus stat point!

Magatama each give different boosts to the Demi-Fiend's stats. Swapping equipped magatama can raise the Agi stat when certain ones are equipped. For example, the Hifumi Magatama gives a +4 bonus to Agi.

Should You Raise Agility Stat?

It is Recommended to Raise the Agility Stat

Agility should be raised alongside Str. and Vit. as these are three stats that greatly benefit players at all stages of the game.

In order for us to make the best articles possible, share your corrections, opinions, and thoughts about 「What Does Agility (Agi) Do | Shin Megami Tensei 3: Nocturne (SMT Nocturne)」 with us!