This is a guide to Gaea, a Magatama in Shin Megami Tensei III HD Remaster (SMT Nocturne) for the Nintendo Switch, PS4, and Steam. Read on to learn how to get the Gaea Magatama, the skills you can learn from it, its stats, strengths, weaknesses, and effects when Gaea acts violently.

How to Get Gaea Magatama

Gaea can be accessed through the locked door near the jail cells in Mantra Headquarters (B1). It's behind a locked door that needs a specific amount of base STR to open!

Gaea is one of the best, if not THE best, Physical damage Magatamas. Like Kamudo, it emphasizes brute strength and simple power to dominate battles. In a sense, it is a stronger version of Kamudo.

Aside from its whopping bonuses to STR and VIT, its skills are what makes it the perfect Physical violence Magatama. 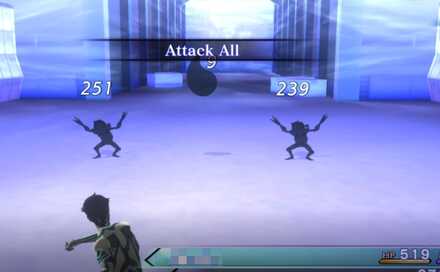 Gaea thrives in violence against multiple targets. Its skills, Gaea Rage and Deathbound, can easily clear out stronger enemies depending on your STR stat. It also gives you the sweet counter skill, Avenge. It's basically a stronger version of Counter.

What makes this Magatama sweet and perfect is its final learnable skill, Attack All. It's a passive skill that turns your normal Attacks target the whole enemy party.

Partnered with Kamudo's Focus skill, as well as a Tarunda from one of your other Demons, you can basically one punch a whole enemy party in three turns!

Of course, no Magatama is perfect. Gaea is weak to Zan, Mudo, and Hama skills (and all other variants like Wind Cutter). This means you're also more susceptible to the one-hit kill magic of Dark and Light.

A good counter would be to either wipe the enemy team before they can make a move, or learn Null skills from other Magatama, like Hifumi's Null: Force.

Since you hit hard, if an enemy has a Physical reflect skill similar to the effects of Attack Mirror, you might end up wiping YOUR team instead of theirs. Be careful against enemies of this type, Analyze will work to your benefit!

Register as a member and get all the information you want. (It's free!)
Login
Opinions about an article or post go here.
Opinions about an article or post
We at Game8 thank you for your support.
In order for us to make the best articles possible, share your corrections, opinions, and thoughts about "How to Get Gaea Magatama: Gaea Stats and Skills Learned" with us!
When reporting a problem, please be as specific as possible in providing details such as what conditions the problem occurred under and what kind of effects it had.