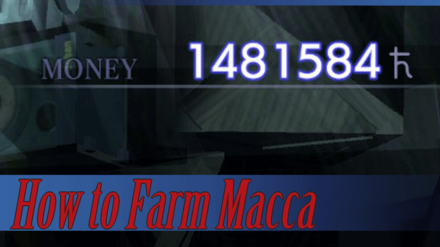 This is a guide to farming Macca in Shin Megami Tensei III HD Remaster (SMT Nocturne) for the Nintendo Switch, PS4, and Steam. Read on to know what is Macca, how to farm Macca, and the best areas to farm Macca.

Macca is the currency used in the world of SMT 3. In the game, Macca is highlighted as an accented h.

How to Farm Macca

You can obtain Macca, EXP, and even items as you defeat Demons. This is essentially grinding for Macca so try not to escape from battle as much as possible.

Pick Your Strongest Demons and Auto-Battle

Since you have to grind for Macca, you can save time with Auto-Battle! Pick your strongest demons for an easy, secured win, and earn your Maccas at the end.

Free up your inventory and sell unused items!

You can rely on your Demons for a status change to take effect, in order to conserve items then sell them off rather than resorting to using them.

Use the Center of the Conception DLC Map

The West Plaza in the Center of the Conception DLC Map is perfect for early-game Macca farming.

Post (0 Comments)
Opinions about an article or post go here.
Opinions about an article or post
We at Game8 thank you for your support.
In order for us to make the best articles possible, share your corrections, opinions, and thoughts about "How to Farm Macca: Macca Farming Guide" with us!
When reporting a problem, please be as specific as possible in providing details such as what conditions the problem occurred under and what kind of effects it had.