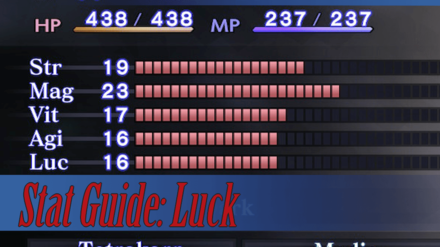 This is a guide to the Luck (Lck) Stat in Shin Megami Tensei III HD Remaster (SMT Nocturne) for the Switch, PS4, and Steam! Read on to learn what is Luck, what is the effect of Luck, and should you raise your Luck stat.

What Does Luck Do?

As of now, it is still unclear what the Luck stat does for the Demi-Fiend. We will update this page as soon as possible when new info about the luck stat has been confirmed.

How To Raise Luck

The Luck stat can be raised by spending skill points when the Demi-Fiend levels up. Sometimes, when a magatama acts violently during a level up, it can even grant you a random bonus stat point!

Magatama each give different boosts to the Demi-Fiend's stats. Swapping equipped magatama can raise the Lck stat when certain ones are equipped. For example, the Iyomante Magatama gives a +3 bonus to Lck.

Should You Raise Luck Stat?

It is not Recommended to Raise the Luck Stat

While Luck can show it's true colors later in the game, we do not recommend raising this stat for early game.

It offers no damage or loot bonus meaning that, despite leveling up, Luck players will remain severely underpowered throughout their playthrough.

Base 14 Luck is Required to Open a Kalpa Door

The DLC only dungeon Amala Labyrinth have certain doors that can only be opened by having enough stats in a specific parameter. A total of 14 base luck is required to open all the available doors in the Amala Labyrinth.

How to Open All Kalpa Doors

In order for us to make the best articles possible, share your corrections, opinions, and thoughts about 「What Does Luck (Lck) Do | Shin Megami Tensei 3: Nocturne (SMT Nocturne)」 with us!