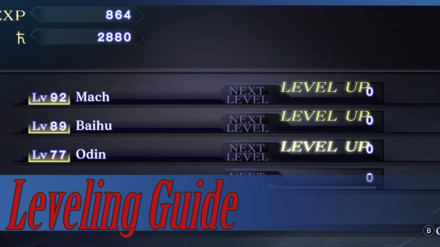 The levels of demons you encounter in the world of SMT 3 are fixed by their areas. This is why the beginning areas of the game are usually bad places for power-leveling.

Instead of staying at the beginner areas, here are some of the best areas to farm EXP during the early game.

Available after arriving in Ginza, players can access this location by going to the world map and following the highway system to the east of Ginza.

You will encounter level 30+ demons in this area but they are easily dealt with by Phys or Dark type skills/demons. Be wary of the Badb Catha as their Wing Buffet skill deals high damage. It is recommended that players run away from them at lower levels unless the party has Electricity magic.

Caution: Most Divine demons here have access to insta-kill Light magic. Save often to prevent the loss of progress!

Place Where the Demi-Fiend Was Born (DLC Dungeon)

The Place Where the Demi-Fiend Was Born, is one of the best places to farm EXP at all levels of the game. Owners of the Mercy and Expectation Map Pack DLC can use this dungeon as soon as they arrive in Ginza and unlock the Amala Link function.

Mitama Demons guarantee Grimoire drops. It is recommended that players flee battles without these demons present as it is a waste of time and HP to fight. Bring a healer with Dia or Media for post-battle heals and you should be good to go!

Kabukicho Prison, despite having a confusing layout, is one of the best mid-game EXP farming locations for non-DLC players.

The Mizuchi and the Raiju demons in particular, are squishy while still giving good EXP. Due to the easiness of battles, this area is good for chaining encounters.

Use the Riberama skill to increase encounter rate and farm EXP to your heart's content.

Yoyogi Park is another good place to farm EXP especially after you've cleared it of Sakahag's presence. The Construction Site area, in particular, has you encounter Titania - a high-level Fairy demon that gives good EXP rewards when beaten.

It's as easy as chaining battles using Riberama to grind out a few levels before moving on with the story.

The Amala Temple Courtyard area is another good place to farm EXP. There is no shortage of high-level enemies to fight here, plus, they do not have much in the way of resistances so any Demi-fiend build should work here.

There is also a nearby Amala Drum Network (and it's inside a safe zone) which ensures that players can warp in and out to heal whenever they want. This area also doubles as a good recruitment zone, as players can access late-game Seraph and Divine demons here simply by recruiting Dominion.

Late-game leveling is a bit harder to achieve without the DLC EXP farm. However, there will be a lot of areas with high level demons that give good experience returns after battle. Here are some of the areas where players can grind out encounters.

As with the trend moving forward, most of the best leveling areas will be in the unlocked areas during late-game. In the Diet Building, players will see much stronger demons like the Girimekhala spawning. But, at this point in the game, the Demi-fiend should already be fielding much more varied active parties due to varying boss weaknesses.

The Diet Building is a good place to farm EXP if players want to experiment with different endings. If players do not want to set foot inside the Tower of Kagutsuchi yet, this is one of the best places to grind out levels.

While not at all convenient due to it's being a Kalpa Dungeon, the B1 level of the Fifth Kalpa dungeon is a good place to farm simply because it spawns high-level Night demons like Nyx and Lilith. They give amazing EXP even at high levels and should not be a problem for a party that's well into the latter content of SMT.

However, it would be advisable to bring demons with revival skills and healing skills outside of the active party in order to increase your chances of survival.

The Kalpa Dungeons and the Labyrinth of Amala are only available in the Maniax or Chronicle versions of the game.

This is by far one of the best places to farm EXP because it spawns some of the highest level demons in the game. The only downside is that when players get to this point, there really isn't a lot of progression left outside of fighting the last few bosses the game has to offer.

Use this area to prepare for the different boss fights headed your way, especially for players who are after the True Demon ending.

Other Tips to Make Power-Leveling Faster

The Riberama Skill increases the encounter rate with demons until the next new Kagatsuchi. On Normal difficulty, this can have players fighting battles with every 2 steps they take.

Use this skill to farm low-level demons with ease, turning on Auto-Battle to maximize efficiency.

One of the best ways to farm EXP is by setting the game to Merciful difficulty. This method gives x3~x4 more EXP per battle and the only thing players need is the skill to offset the difficulty's low encounter rate.

Note: Changing difficulties is easy and will not compromise saves. You can even change from Hard, to Merciful, then back to Hard if you wanted to. The best part is that it's free to download for any platform!

Farm According to Your Levels

Do not farm the beginning areas when you are 6-10 levels ahead of the strongest demon there. The EXP just isn't worth it.

Instead, go to places with demons of a similar level to get appropriate rewards for your level.

Some demons, like Pixie, will eventually try to change the spells that they have. Zio will have a chance to become Mazio which targets all enemy combatants on the field.

AOE spells are useful since they clear mobs easily especially if they target weaknesses.

Pay attention to his health especially when Auto-Battling to grind EXP.

While there are some good spells in the early game, the Demi-Fiend shines when it comes to Physical Skills.

Do not neglect strength as this can help you later on with tougher enemies down the line.

What Does Strength (Str) Do

Post (0 Comments)
Opinions about an article or post go here.
Opinions about an article or post
We at Game8 thank you for your support.
In order for us to make the best articles possible, share your corrections, opinions, and thoughts about "Leveling Guide: Best Leveling Areas" with us!
When reporting a problem, please be as specific as possible in providing details such as what conditions the problem occurred under and what kind of effects it had.