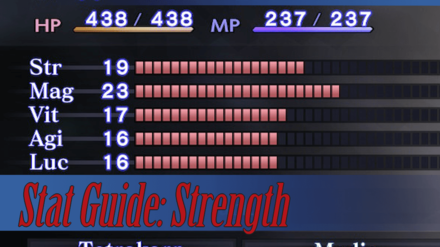 This is a guide to the Strength (Str) Stat in Shin Megami Tensei III HD Remaster (SMT Nocturne) for the Switch, PS4, and Steam! Read on to learn what is Strength, what is the effect of Strength, and should you raise your Strength stat. 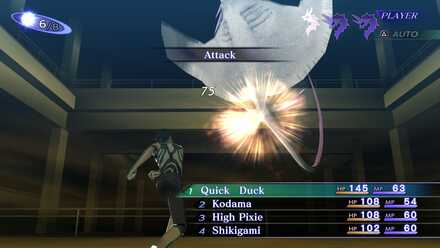 A higher Strength number means that Normal Attacks will deal more damage, and Physical Skills like Lunge will also deal more damage. The strength stat does not affect the amount of HP a player has.

High strength also allows players to open some doors found in the world. One such door can be found in the Mantra Headquarters in Ikebukuro.

How To Raise Strength

The Strength stat can be raised by spending skill points when the Demi-Fiend levels up. Sometimes, when a magatama acts violently during a level up, it can even grant you a random bonus stat point!

Magatama each give different boosts to the Demi-Fiend's stats. Swapping equipped magatama can raise the Str stat when certain ones are equipped. For example, your first Magatama, Marogareh, gives a +2 bonus to Str.

Should You Raise Strength Stat?

It is Recommended to Raise the Strength Stat

Strength directly affects the amount of Physical damage players do. Since most of the time in game is spent punching enemies, raising strength is a must.

Also, some of the Demi-fiend's best skills are Phys-based making this stat almost essential for late-game content.

Early on in the game, you'll encounter a locked door in the prison area in the jails of Mantra HQ in Ikebukuro. This door can only be opened by having 24 base strength. Opening this door rewards you with the Gaea Magatama, a high Vitality and High Strength Magatama with strong physical skills.

How to Get Gaea Magatama

The Amala Labyrinth can only be accessed by using the Chronicles or Maniax DLC. By reaching the third Kalpa, you'll be encountering 3 routes that each require a specific amount of stats to navigate through. A strength route exists and a 25 base strength is required to clear it.

In order for us to make the best articles possible, share your corrections, opinions, and thoughts about 「What Does Strength (Str) Do | Shin Megami Tensei 3: Nocturne (SMT Nocturne)」 with us!