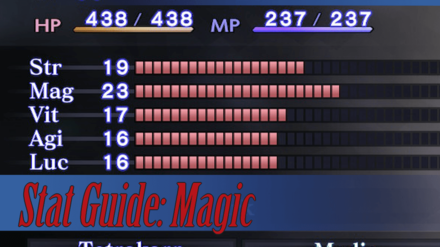 This is a guide to the Magic (Mag) Stat in Shin Megami Tensei III HD Remaster (SMT Nocturne) for the Switch, PS4, and Steam! Read on to learn what is Magic, what is the effect of Magic, and should you raise your Magic stat.

What Does Magic Do?

The Magic stat raises the Demi-Fiend's MP by a certain amount. While MP automatically increases after every level up, an additional point in Magic will add even more.

How To Raise Magic

The Magic stat can be raised by spending skill points when the Demi-Fiend levels up. Sometimes, when a magatama acts violently during a level up, it can even grant you a random bonus stat point!

Magatama each give different boosts to the Demi-Fiend's stats. Swapping equipped magatama can raise the Mag stat when certain ones are equipped. For example, the Shiranui Magatama gives a +5 bonus to Mag.

Should You Raise Magic Stat?

It is Optional to Raise the Magic Stat

The reason for this is that while there are very good magic spells in the game that do good damage, they will always be limited by MP usage.

MP Recovery items are hard to come by in SMT3, and maintaining a magic build is tedious, especially when demons also need their MP managed.

The Amala Labyrinth can only be accessed by using the Chronicles or Maniax DLC. By reaching the third Kalpa, you'll be encountering 3 routes that each require a specific amount of stats to navigate through. A magic stat route exists and 25 base magic stat is required to clear it.

Post (0 Comments)
Opinions about an article or post go here.
Opinions about an article or post
We at Game8 thank you for your support.
In order for us to make the best articles possible, share your corrections, opinions, and thoughts about "What Does Magic (Mag) Do" with us!
When reporting a problem, please be as specific as possible in providing details such as what conditions the problem occurred under and what kind of effects it had.