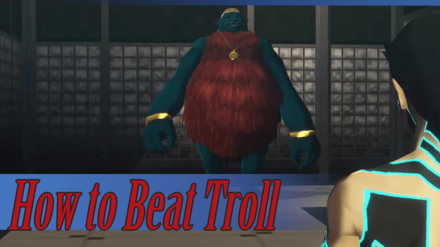 This is a guide to Troll, a mini-boss in Shin Megami Tensei III HD Remaster (SMT Nocturne) for the Nintendo Switch, Steam, and PS4. Read on to know how to beat Troll, Troll's weaknesses, and best strategies against this boss!

While Mind skills do not necessarily inflict damage, exploiting Troll's weakness towards it will offer you more turns.

Troll will utilize Ice attacks. And, yes, it will absorb your Ice attacks, so don't summon Ice attack-reliant demons to your party!

Best Demons to Use Against Troll

How to Beat Troll

Troll has no resistance to Phys attacks, so don't hesitate throwing hands with them.

Troll Has No Immunity to Instakill Attacks

Likewise, Troll has zero immunity to instakill attacks. It doesn't hurt to try! You luckily might defeat him with a skill such as Hama.

If you don't have an offense item that can inflict Mind ailments, you can pass the turn to a Demon that has Mind attacks.

Bring other demons that block Ice

Since Troll uses Ice attacks, we suggest bringing along other demons that can block Ice.

In order for us to make the best articles possible, share your corrections, opinions, and thoughts about 「How to Beat Troll: Troll Weakness and Strategies | Shin Megami Tensei 3: Nocturne (SMT Nocturne)」 with us!