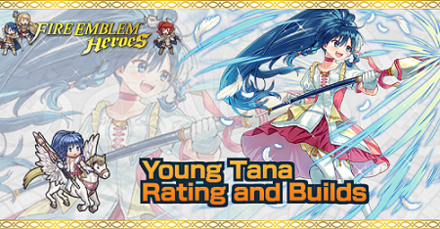 This is a ranking page for the hero Tana - Frelian Starlight from the game Fire Emblem Heroes (FEH). Read on to learn the best IVs (Individual Values), best builds (Inherit Skill), weapon refinement, stats at Lv 40, and more for Young Tana.

The best IVs for Young Tana are +Spd and -Res. A higher Spd stat allows Young Tana to get a ton of follow-up attacks on her foes. Her statline and her skills allow her to attain huge levels of Spd, so in some situations, you may want to aim for a +Atk IV instead especially if you do not plan to change her base skillls too much.

Her Res is of less importance, and since she has a weakness to bows, so taking a -Res bane is for the best.

We recommend a +Spd IV when merging Young Tana to 10. This is for the same reasons as above. You can also take a +Atk IV on her, as at this point her Spd levels will already be very high especially taking into consideration her skill buffs too.

A budget setup for Young Tana! Her kit is already very complete, so you only need a movement-assist skill and a Sacred Seal of choice to complete it. Atk/Spd Solo 3 is a solid choice.

Young Tana is a close physical attacker (range = 1). Therefore, when not accounting for the Weapon Triangle, the amount of damage she deals will be equivalent to her Atk minus the foe's Def stat.

Lance of Frelia Allows Her to Move to an Ally 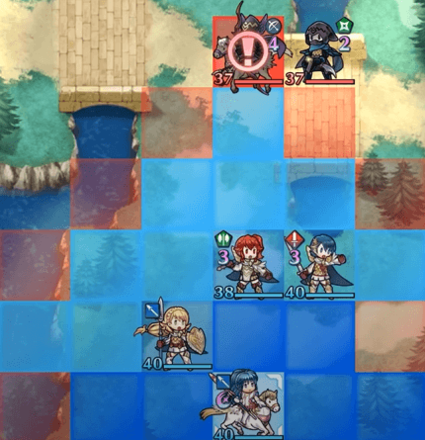 Young Tana's great mobility can be seen above!

Young Tana's weapon not only accelerates her special trigger, but also allows her to move to an adjacent space of an ally within 2 spaces.

This gives her options for a surprise attack on enemy unit and opens more build options for her, as she does not need to have Flier Formation 3 or Aerobatics 3.

In addition to the mobility bonus that Lance of Frelia gives, it also grants +6 Atk/Spd if Tana's HP ≥ 25%, and +10 Def/Res if she initiates combat.

This synergizes well with Steady Impact, and Atk/Spd Rein to make Young Tana very powerful when in combat. 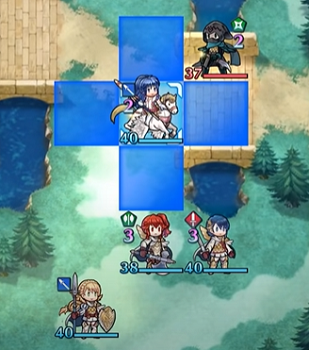 This is will allow her to reposition herself to safety after attacking, or if she's low health, will allow her to move closer to the enemy team and allies with Wings of Mercy 3 can swoop in to her side for surprise attacks.

As a flying unit, Young Tana takes 1.5x damage from bows and weapons effective on flying units. Be sure to keep them out of the range of archers and leave them to other units.

Tana - Frelian Starlight Only Appears as a 5 Star Hero!

Young Tana as a Source Hero

Young Tana can be used to inherit Steady Impact, S/D Near Trace 3, or Atk/Spd Rein 3.

We recommend getting the prerequisites of Steady Impact from other units so that you can inherit said skill and another skill chain of choice between S/D Near Trace 3 and Atk/Spd Rein 3.

How to Get Young Tana / Illustrations / Voice Actor / Quotes

How to Get Young Tana

Young Tana is a limited time Hero who can be pulled from a Special Heroes Summoning Event. They do not appear in regular summons.

Register as a member and get all the information you want. (It's free!)
Login
Opinions about an article or post go here.
Opinions about an article or post
We at Game8 thank you for your support.
In order for us to make the best articles possible, share your corrections, opinions, and thoughts about "Young Tana Builds and Best IVs" with us!
When reporting a problem, please be as specific as possible in providing details such as what conditions the problem occurred under and what kind of effects it had.