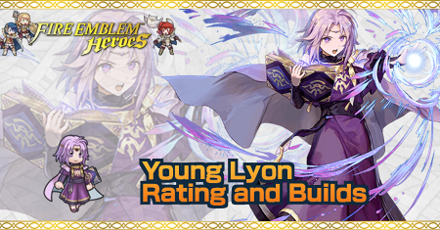 This is a ranking page for the hero Lyon - Grado's Gaze from the game Fire Emblem Heroes (FEH). Read on to learn the best IVs (Individual Values), best builds (Inherit Skill), weapon refinement, stats at Lv 40, and more for Young Lyon.

Young Lyon's best IVs are hands down +Atk and -Spd. Young Lyon's offensive style is to hit hard with single strikes that are sometimes boosted by Iceberg whenever it is up so getting a +Atk IV is ideal. His Spd is really low and he relies on skills like Quick Riposte to nail follow-up attacks so -Spd is the ideal bane for him.

You could also get a +Res IV is you prefer a tanky Young Lyon build.

We recommend a +Atk IV when merging Young Lyon to 10. This is for the same reasons as above. At this point, he will hit very hard especially against colorless units whom Tome of Grado is strong against.

This is a high budget build for Young Lyon that makes use of Mirror Stance 3 Sacred Seal to synergize with Tome of Grado, and Quick Riposte 3 to become a very powerful unit in the enemy phase. Null C-Disrupt 3 is taken to make sure that this Young Lyon build is not shut down by skills that block counterattacks. You could say this is a vital skill in competitive maps.

A simple Solo setup for Young Lyon. Since his Spd is beyond saving, the efficient way to increase is survivability is to increase his Def/Res levels. Taking the Atk/Def Solo 3 Seal is one way to do this as he already has native access to Atk/Res Solo 3. Last but not the least, Quick Riposte 3 is taken to leverage his hard-hitting attacks and it synergizes well with Tome of Grado's effects that are centered in the enemy phase. Sol is taken for more sustain.

Young Lyon is a ranged magic attacker (range = 2). Therefore, when not accounting for the Weapon Triangle, the amount of damage he deals will be equivalent to his Atk minus the foe's Res stat.

Tome of Grado is a powerful tome, that is extra helpful against colorless foes!

Additionally, if it meets the previous condition and the foe is of the colorless attribute, it grants a Raven-effect to Young Lyon which basically grants him weapon-triangle advantage over the foe. This is a 20% damage bonus against the foe, and a 20% damage reduction benefiting Lyon.

Even if you are not against a colorless foe, Lyon can enjoy the primary effect and it is accessible on both phases of the game!

Tome of Grado's penalty can also be seen above

Atk/Res Solo 3 grants +6 to Atk/Res when Young Lyon is not adjacent to allies. This adds to his offensive and defensive ability making him a good match-up to many magic-using foes.

This works well with the penalties inflicted by Tome of Grado

Def/Res Gap 3 adds +5 Def/Res to the ally unit with the highest Def + Res total in your team. This skill excludes Young Lyon, so it always gets applied to the tankiest member of your team, making him a good support for tank units.

Iceberg, Young Lyon's special, has a long cooldown but it hits very hard as it adds 50% of Young Lyon's Res to his damage. This it fitting for him since he already has high Res levels. This means that you can stack a ton of Res into Young, building his bulk, but also be able to dish out tons of damage!

We Recommend You Unlock Potential for Lyon - Grado's Gaze!

Young Lyon as a Source Hero

Young Lyon can be used to inherit the skills Atk/Res Solo 3 or Def/Res Gap 3. You can also get Iceberg from him if you need it.

How to Get Young Lyon / Illustrations / Voice Actor / Quotes

How to Get Young Lyon

Young Lyon is a limited time Hero who can be pulled from a Special Heroes Summoning Event. They do not appear in regular summons.

Young Lyon is actually the potential 4* pull of this banner!

Register as a member and get all the information you want. (It's free!)
Login
Opinions about an article or post go here.
Opinions about an article or post
We at Game8 thank you for your support.
In order for us to make the best articles possible, share your corrections, opinions, and thoughts about "Young Lyon Builds and Best IVs" with us!
When reporting a problem, please be as specific as possible in providing details such as what conditions the problem occurred under and what kind of effects it had.