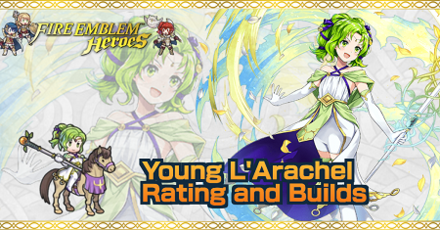 This is a ranking page for the hero L'Arachel - Seeker of Justice from the game Fire Emblem Heroes (FEH). Read on to learn the best IVs (Individual Values), best builds (Inherit Skill), weapon refinement, stats at Lv 40, and more for Young L'Arachel.

The best IVs for Young L'Arachel are +Spd and -Def. A higher Spd stat allows Young L'Arachel to get a ton of follow-up attacks on her foes. This is important as she boasts offensive abilities on top of her solid offenses too! It also improves her bulk by making her less susceptible to follow-up attacks. Her Def stat is of less importance so it can be safely taken as her bane.

We recommend a +Spd IV when merging Young L'Arachel to 10. This is for the same reasons as above! You can also get a +Atk IV if you prefer to support her Spd levels with buffs and team composition instead.

A budget build for Young L'Arachel that doesn't deviate from her main function as an offense-healer hybrid. The C skill is very flexible, but take note that Atk Tactic 3 is for mixed teams. Another option you can take is Hone Cavalry if you are running a cavalry team. The Sacred Seal slot is flexible too. Mystic Boost 3 is taken to counter Atk/Spd Push 4's self-inflicted damage.

Young L'Arachel is a ranged magic attacker (range = 2). Therefore, when not accounting for the Weapon Triangle, the amount of damage she deals will be equivalent to her Atk minus the foe's Res stat.

Prevents Counterattacks With Her Weapon

L'Arachel's weapon, Staff of Rausten, not only inflicts Res-6 and gives herself Atk/Spd+6, but she also prevents enemy units within 5 spaces of her from counterattacking through their next actions.

This is extremely powerful, as her and her allies can attack without any fear of retaliation.

Rescue+ is a combination of a heal and a movement-assist

When Young L'Arachel uses Rescue+ on an ally, it restores HP equal to 50% of Young L'Arachel's attack and an effect similar to Drag Back occurs. This is unique in the sense that it is both a heal and a movement-assist skill. Its clear use is to help allies retreat into safer zones while healing them though you can defnitely be more creative with such a versatile skill. This significantly reduces the chance of that ally getting taken out in battle.

The only obvious drawback to this is it does not lead to Windfire Balm+ or any other special from activating. Survey the needs of the map, attack or heal accordingly to lead your team to victory.

Young L'Arachel has the qualities of a great offensive unit too!

While Resue+ and Staff of Rausten's primary effect can be the great cornerstones of Young L'Arachel's kit making her a great support unit, you cannot simply ignore her potential as a secondary offensive unit. First off, Staff or Rausten inflicts a -6 Res penalty to foes and an +6 Atk/Spd buff when initiating combat. Additionally, S/R Far Trace 3 inflicts -3 Spd/Res!

Finally, the nail to the coffin is her native access to the growingly popular Atk/Spd Push 4 which takes her attacks to the next level. With all these, she can definitely score some one-sided matchups where she can take out foes unscathed thanks to the ability of her weapon to block counterattacks. 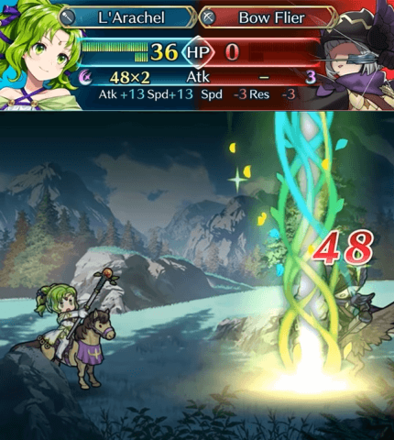 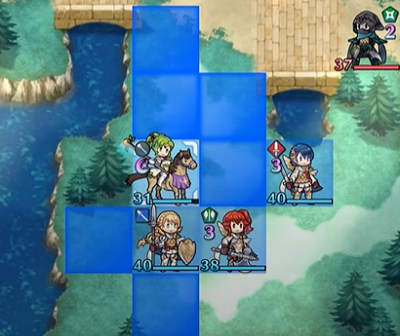 This is will allow her to reposition herself to safety after attacking, or if she's low health, will allow her to move closer to the enemy team and allies with Wings of Mercy 3 can swoop in to her side for surprise attacks.

As a colorless staff unit, Young L'Arachel is weak to units like Fallen Lyon and Cecilia, who have weapons that are effective against colorless units.

Be mindful where you position her if an enemy team has these units!

Young L'Arachel is a Cavalry unit, making her weak to skills against such units such as Gronnwolf.

If attacked by a unit with this type of skill, L'Arachel will take 1.5x damage. Be mindful of what skills your enemies are equipped with.

L'Arachel - Seeker of Justice Only Appears as a 5 Star Hero!

Young L'Arachel as a Source Hero

How to Get Young L'Arachel / Illustrations / Voice Actor / Quotes

How to Get Young L'Arachel

Young L'Arachel is a limited time Hero who can be pulled from a Special Heroes Summoning Event. They do not appear in regular summons.

Register as a member and get all the information you want. (It's free!)
Login
Opinions about an article or post go here.
Opinions about an article or post
We at Game8 thank you for your support.
In order for us to make the best articles possible, share your corrections, opinions, and thoughts about "Young L'Arachel Builds and Best IVs" with us!
When reporting a problem, please be as specific as possible in providing details such as what conditions the problem occurred under and what kind of effects it had.