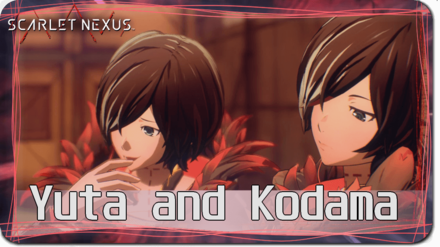 Similar to previous fights with Kodama before, they have bubble slash attacks that will deal Confusion.

Kodama and Yuta have a powerful triple slash attack that has long range. Make sure to avoid them to prevent getting knocked down.

Kodama and Yuta also have the ability to attack at the same time, combining their attacks to take your party down. Once again, keep your distance and use Hypervelocity to steer clear from their combos.

Yuta and Kodama have strong ranged sword attacks, which means keeping your distance is key. Use Psychokinesis to wear down their shields and perform Brain Crush.

How to Beat Kodama and Yuta Melone

Confusion prevents you from using your SAS skills and makes your character harder to control. Avoid these attacks, as this leaves you vulnerable for a number of seconds.

Brain Field is a powerful ability that is best reserved late in the fight. Use it when Yuta and Kodama are weakened to end the fight in the quickest way possible.

In order for us to make the best articles possible, share your corrections, opinions, and thoughts about 「How to Beat Kodama and Yuta Melone: Boss Fight Guide | Scarlet Nexus」 with us!