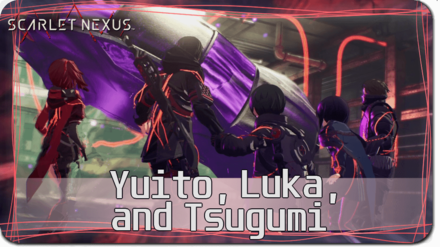 Like previous phases, Yuito will also use his Psychokinesis on you. Counter the objects he throws with the Perfect Dodge + Intercept mechanic, and use your own Psychokinesis skills to hold him off.

Like Future Yuito during Phase 4, this Yuito will now have an expanded sword combo. Beware of the 5th slash at it deals a lot of damage including a knockback animation.

Warning: In the early phases of the fight, Yuito will be boosted by Luka's Teleportation. Be careful as he attacks really fast during this stage.

When Yuito drops down to 1/4 of his HP, he will immediately activate his Brain Field. However, with all 4 SAS available to you, players can focus on dealing damage rather than wasting Yuito's time inside the Brain Field.

Alternatively, players can beat him to the punch and activate a Brain Field of their own. This prevents him from activating his own Brain Field while giving you a big damage advantage.

Luka will constantly teleport and perform quick attacks that are hard to deal with. Use Hypervelocity to counter his pesky SAS and create openings to attack.

Warning: One of Luka's attacks will be a heavy hitter, knocking Kasane back and stunning her. Watch out since it is hard to anticipate the attack.

During the fight, Tsugumi will use her pistol to deal long range attacks that can interrupt player actions. Her moves will not be obvious so watch out for her shots.

If you use Invisibility during the fight, Tsugumi will counter with Clairvoyance.

All 3 members of Yuito platoon will activate Brain Drive when they drop down to half health. Try to focus them down one-by-one to ensure that only 1 enemy is in Brain Drive at any given time.

Dealing with another OSF team is a new challenge at this point in the game. Learn the Concurrent SAS Activation skill and attack each combatant according to their weaknesses.

If you do not have this learned, rely on Psychokinesis + Hypervelocity or Invisibility to deal damage to all three.

How to Beat Yuito, Luka, and Tsugumi

Luka and Tsugumi will provide constant support to Yuito throughout the fight, making it difficult to deal damage. Take out Tsugumi first to deny them the range advantage and access to her SAS, Clairvoyance.

With Tsugumi out of the fight, players can now use abilities like Invisibility and Hypervelocity without interruptions.

With Tsugumi gone, focus down Luka using a mixture of Invisibility, Hypervelocity, and Psychokinesis. Beating him will deny Yuito the power to use Teleportation.

There are a number of objects that you can use as weapons with Psychokinesis. Not only do they give you invulnerability frames during the animation, they also deal massive damage to your enemies.

Find the right time to use them to deal the most damage possible. If you find your channeling getting interrupted, activate Hypervelocity or Invisibility to complete the action.

You can chain multiple Psychokinesis Follow-Up Attacks by activating Hypervelocity and going to town on any of the combatants.

With this, your channeling animations are less likely to be interrupted and you'll be dealing a lot of damage in the process.

Use the Water Barrels + Electrokinesis

Aside from the vending machines and electric poles, there will be water barrels in this area that you can use with Psychokinesis. Throw it at any of the 3 enemies to soak them, then use Electrokinesis to stun them.

Also, remember that Electrokinesis can significantly boost your damage even without soaking your enemies. Use Shiden's SAS liberally to maximize your damage output.

Go Into Your Brain Field First

As soon as you deal a Brain Crush that drops Yuito to 1/4 of his HP, activate your Brain Field immediately to easily finish the fight. This will prevent Yuito from activating his own Brain Field and give you an opportunity to deal massive damage.

In order for us to make the best articles possible, share your corrections, opinions, and thoughts about 「How to Beat Yuito, Luka, and Tsugumi: Boss Fight Guide | Scarlet Nexus」 with us!