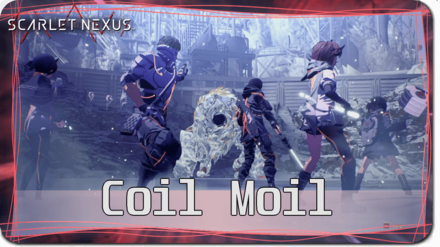 This is a guide to Coil Moil, a boss in Scarlet Nexus for the Playstation, XBOX, and Steam. Read on to learn how to beat Coil Moil, Coil Moil's strengths and weaknesses, and the best team comp and SAS to use against this boss!

Coil Moil has a water cannon on its head. We highly recommend mastering Perfect Dodge for this battle. You can also use Teleportation to penetrate through its water cannon attack and jump in close.

Coil Moil can tunnel underground and spring back undetected. Use Clairvoyance to detect where Coil Moil will spring from.

Alternatively, you can determine where Coil Moil will spring out from by paying attention to the ground. Crumbling ice indicates that it is about to jump out. Block the damage by activating Sclerokinesis.

Ice Spikes will rise from the ground in a wide range whenever Coil Moil pleases. Keep mobile or use Teleportation to speed up your dodging.

Coil Moil also has a heavy punch. After it hits the ground, it will generate large Ice Spikes in front of itself. Dodge forward or towards its back to avoid this attack.

At certain points of the fight, Coil Moil will generate Water Bubbles that will home in on players. They deal a lot of damage, so make sure to avoid them using Sclerokinesis or Teleportation.

Alternatively, you can use Invisibility for Kasane's Route when Coil Moil does this attack.

When Coil Moil's icy shell is broken, it will sometimes surround itself with Water Pillars that prevent players from getting too close.

During this time, players can use Teleportation (Yuito) or Hypervelocity (Kasane) to bypass the pillars and attack its now exposed back.

How to Beat Coil Moil

Use Clairvoyance When It Tunnels Underground

Coil Moil can tunnel underground and spring back undetected. Use Clairvoyance to detect where Coil Moil will spring from.

Perfect Dodge Its Attacks Or Use Teleportation

We highly recommend mastering Perfect Dodge for this battle. You can also use Teleportation to penetrate through its water cannon attack and jump in close.

Use Pyrokinesis When It's Covered in Ice or Down

In Yuito's Route, Pyrokinesis is highly effective when it is covered in ice. Likewise, this SAS is also powerful when Coil Moil is down.

For Kasane's Route, use Electrokinesis when you break its shell as Coil Moil will have the Wet status effect at this time. With Electrokinesis it is possible to stun lock it for a long time.

Target Its Back Shell Weakness

When Coil Moil protects itself with water pillars, it will expose its back to attack. The back will be highlighted, indicating a weakness to exploit. Use Teleportation to bypass the water pillars and attack its exposed back.

In Kasane's Route, use Hypervelocity to bypass the water pillars and attack its exposed back. Add crush gauge damage by also enabling Invisiblity.

Alternatively, for Kasane's Route, you can use Duplication and barrage Coil Moil with objects until its shell breaks.

How to Perform a Read Attack

Register as a member and get all the information you want. (It's free!)
Login
Opinions about an article or post go here.
Opinions about an article or post
We at Game8 thank you for your support.
In order for us to make the best articles possible, share your corrections, opinions, and thoughts about "How to Beat Coil Moil: Boss Fight Guide" with us!
When reporting a problem, please be as specific as possible in providing details such as what conditions the problem occurred under and what kind of effects it had.