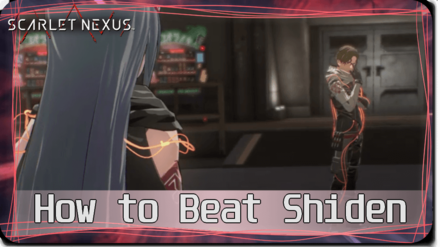 This is a guide to Shiden Ritter, a boss in Scarlet Nexus for the Playstation, XBOX, and Steam. Read on to learn how to beat Shiden Ritter, Shiden Ritter's strengths and weaknesses, and the best SAS to use against this boss!

Shiden's main attack is a series of baton strikes infused with Electrokinesis. Avoid his attacks and attack after his sequence is done.

Shiden will sometimes jump backwards and shoot a small projectile infused with Electrokinesis. You can use Perfect Dodges to minimize the damage it deals.

Being a melee fighter, Shiden is at a disadvantage in this fight. Use Kasane's ranged attacks to damage him while still keeping away from his attacks.

Psychokinesis and Psychokinetic Follow-Up Attacks will be your bread and butter for this fight as Shiden has very little room to dodge your projectiles.

How to Beat Shiden Ritter

Dodging Shiden's primary attacks allow you to find openings to attack him. Players can also pepper him with Psychokinetic Attacks while he is in the middle of his swing animations.

Use Psychokinesis to Break Shields

Shiden is protected by a shield that you need to break using Psychokinesis. Use Psychokinetic Follow-Up Attacks with your normal ranged attacks to quickly break his shields.

Finish Him with Brain Crush

After breaking Shiden's shields, players can use Brain Crush to deal a lot of damage in one go. While this will reset his shields, his low health will mean that it will be easier to break his shields a second time.

Register as a member and get all the information you want. (It's free!)
Login
Opinions about an article or post go here.
Opinions about an article or post
We at Game8 thank you for your support.
In order for us to make the best articles possible, share your corrections, opinions, and thoughts about "How to Beat Shiden Ritter: Boss Fight Guide" with us!
When reporting a problem, please be as specific as possible in providing details such as what conditions the problem occurred under and what kind of effects it had.