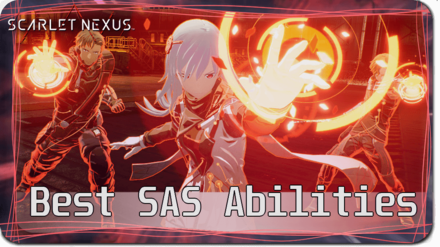 This is a guide on the Best SAS Abilities in Scarlet Nexus for the Playstaion, XBOX, and Steam platforms! Read on to find out which SAS Abilities are the best to use when suppressing the Others!

Psychokinesis is an extremely powerful SAS Ability, despite its rather simple playstyle. Progressing through the story allows you to use other facets of its power, including the Brain Field, which all but defeats enemies in one hit.

Apart from seeing hidden enemies, executing a Perfect Dodge Attack while under the effects of Clairvoyance critically eliminates enemies and depletes the Crush Gauge of any enemy you are up against.

Having Sclerokinesis active in combat renders you almost invulnerable against enemy attacks. It shall develop a shield all around you, protecting you even against the most dangerous foes. Its only downside is its short runtime, but its benefits far outweigh its cons.

A Tier: Hypervelocity Due to Speed Bonus

Maneuverability is one of the key factors that contribute to successful engagements with the enemy. Using Hypervelocity gives that in spades, giving you a speed bonus that lets you move and attack enemies before they can defend.

A Tier: Pyrokinesis Due to Burning Status Ailment

Using Hanabi's Pyrokinesis can help to speed up fights due to its bonuses to attack power. Inflicting enough damage against enemies while using this ability also makes them more vulnerable to catching the Burning Status Ailment.

A Tier: Electrokinesis Due to Shock Status Ailment

Similar to Pyrokinesis, Shiden's Electrokinesis also adds bonuses to attack power once activated. Not only does the Shock Status Ailment get inflicted upon enemies when they receive too much damage, but they also will be stunned and unable to move while under its effects.

B Rank: Duplication Due to Damage Output

B Rank: Teleportation Due to Area Traversal

Although useful as an Ability to use in certain combat scenarios, Teleportation is rarely an Ability that you will think of outside of situations that require it. Its biggest contribution to any team is its ability to allow you to traverse through locked gates to discover hidden items in an unexplored portion of maps.

Outside of its ability to cause critical damage against unsuspecting enemies, there will rarely come a time when Invisibility can be used. Disrupting enemies that hide at the sight of you is one way to maximize this Ability's effectivity.

How to Combine SAS Abilities

Learn the Concurrent SAS Skill on the Brain Map

To begin combining SAS Abilities, you will need to learn the Concurrent SAS Activation skill in the Brain Map, which lets you activate more than just one SAS Ability in the heat of combat.

For a more comprehensive guide on how to learn Skills, check out our guide below!

Brainmap Guide: How to Learn Skills

With both SAS Abilities active, you will be able to send more than just one object flying the distance towards your enemy. Using both Abilities at the same time will increase both damage output and deplete the Crush Gauge of enemies faster when using Psychokinesis.

Using two of the game's movement enhancing Abilities will give you the edge you need when fighting against enemies that are difficult to pin down such as Santa-type enemies. This combo is less useful against other types of enemies, but is still nonetheless valuable in terms of increasing your mobility around the field twofold.

Using either Pyrokinesis and Electrokinesis with Duplication allows for an easier time rending Burning or Shocked Status Ailments against your enemies due to the duplication of your powers. Damage output against enemies increases with either Ability active alongside Duplication.

Having Sclerokinesis active alongside Hypervelocity brings all the positives of using the Hypervelocity Ability without the risks of it being cancelled due to enemy attacks. The protective shield around you from Sclerokinesis will block out all forms of damage that your enemies can cast against you.

Become an untouchable assassin and move beyond normal speeds while having all your attacked be multiplied. This Ability combo is particularly useful against Karen Travers.

Register as a member and get all the information you want. (It's free!)
Login
Opinions about an article or post go here.
Opinions about an article or post
We at Game8 thank you for your support.
In order for us to make the best articles possible, share your corrections, opinions, and thoughts about "SAS Abilities Tier List: Best SAS Abilities" with us!
When reporting a problem, please be as specific as possible in providing details such as what conditions the problem occurred under and what kind of effects it had.