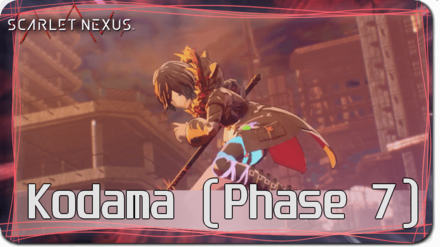 Similar to her previous encounter, Kodama has a Triple Slash attack that has a wide arc and long range. Dodging this is a priority, as you can get knocked down for a long time.

Kodama can also copy other characters and use their SAS. Use your own SAS Skills to counter this and prevent Kodama from taking advantage.

Kodama is a fast and strong enemy that uses quick attacks and dodges. This makes Hypervelocity a great way to deal damage easily.

How to Beat Kodama Melone (Phase 7)

Combining SAS Abilities during this fight will help give you an edge in the fight. A good example is Hypervelocity and Electrokinesis. This allows you to avoid attacks, while having the opportunity to deal more damage overall.

To finish off Kodama, using Brain Field allows you to finish the fight early. Activate it near the end of the fight to break her shell and health easily.

Register as a member and get all the information you want. (It's free!)
Login
Opinions about an article or post go here.
Opinions about an article or post
We at Game8 thank you for your support.
In order for us to make the best articles possible, share your corrections, opinions, and thoughts about "How to Beat Kodama Melone (Phase 7): Boss Fight Guide" with us!
When reporting a problem, please be as specific as possible in providing details such as what conditions the problem occurred under and what kind of effects it had.