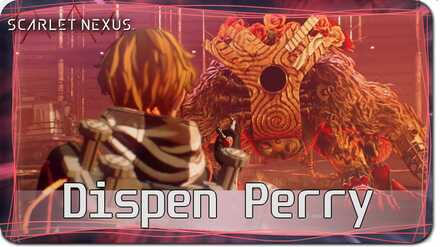 This is a guide to Dispen Perry, a boss in Scarlet Nexus for the Playstation, XBOX, and Steam. Read on to learn how to beat Dispen Perry, Dispen Perry's strengths and weaknesses, and the best SAS to use against this boss!

Dispen Perry has a ranged Water Cannon attack that applies the wet debuff to Kasane, slowing down her movement in the process. When players keep their distance, be aware that the boss can still attack from range.

Dispen Perry can perform a Leap Attack that covers a great distance. It is usually indicated by a short shaking of its legs prior to jumping. Do note that upon landing, it will perform area-of-effect melee damage so try not to get caught once it lands.

Dispen Perry is resistant to most normal attacks. Players will only be able to do significant damage if they make use of the Yellow Dump Truck gimmick. In the meantime, Electrokinesis can work as a good substitute, dealing a moderate amount of damage when used.

How to Beat Dispen Perry

Use the Yellow Dump Trucks

Dispen Perry's arena will have marked dump trucks perched along its top edge. Pull on them using Kasane's Psychokinesis in order to deal massive damage to Dispen Perry. Using this method will break the cannon on its back, applying the wet debuff and making it vulnerable to Electrokinesis.

Do note that the prompt to bring down the trucks will only become available if you are near enough to a truck. And, it can only appear after Dispen Perry performs its Leap Attack. Bringing the trucks down will not be available until then.

Dispen Perry's melee attacks are a bit harder to dodge than its ranged attacks. Since players will need to bait out a leap attack in order to call down the trucks, it is recommended that you keep your distance throughout the fight.

Beware of its Leap Attack

It will begin its Leap Attack when it shakes its legs. Dodge left or right once it is in the air and put a bit of distance between yourself and the boss.

Remember, it is not enough to dodge a small distance since, upon landing, Dispen Perry will do area-of-effect melee damage. Make sure you are clear of his range as getting hit will interrupt Psychokinesis.

When you hit and crack Dispen Perry's water cannon with the Yellow Dump Truck, it will apply a Wet debuff. This makes it vulnerable to Shiden's Electrokinesis.

Chain your attacks with Kasane's Psychokinetic Follow-Up Attacks in order to deal damage during the short stun duration.

Aim for the water cannon

Players can aim for the water cannon on the back of the boss using Kasane's Psychokinesis. Hurl objects at it to deal moderate damage to the boss.

Register as a member and get all the information you want. (It's free!)
Login
Opinions about an article or post go here.
Opinions about an article or post
We at Game8 thank you for your support.
In order for us to make the best articles possible, share your corrections, opinions, and thoughts about "How to Beat Dispen Perry: Boss Fight Guide" with us!
When reporting a problem, please be as specific as possible in providing details such as what conditions the problem occurred under and what kind of effects it had.