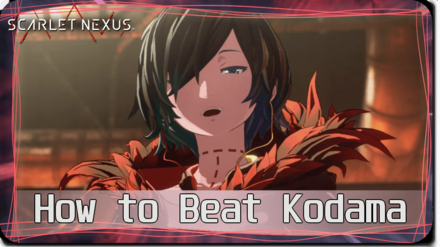 This is a guide to Kodama Melone, a boss in Scarlet Nexus for the Playstation, XBOX, and Steam. Read on to learn how to beat Kodama Melone, Kodama Melone's strengths and weaknesses, and the best SAS to use against this boss!

Kodama's regular attack is a series of three consecutive slash attacks that deals damage from a long range. They will knock you back and interrupt attacks, so make sure that you dodge them.

Kodama unleashes an AoE attack that knocks you back and deals high damage. You can jump over this or use Sclerokinesis, then attack her while she's not moving.

Kodama has her own version of Brain Drive. This amplifies all of her other attacks, and makes her faster.

Her Triple Slash attack, for example, will become much larger waves. She will also use the Confuse State attacks more often in this state. 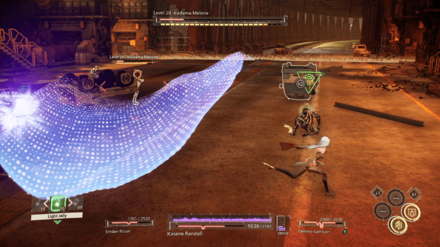 Some of Kodama's attacks can inflict a Confuse state. This will alter your controls scheme, making your character harder to move and delaying ability activation times.

The attack will be signalled by 2 small waves that homes in on players. Kodama will use this often when she enters Brain Drive.

Kodama has no obvious weaknesses. The best way to combat her is to use the Water Barrels against her. Not only will they take large chunks of her shield away, they will also apply the Wet status, making her weak to Shiden's Electrokinesis.

How to Beat Kodama Melone

Kodama's attacks are about as quick as yours, which means she can also dodge your attacks as effectively. Make sure you stay out of the way of her attacks and find openings.

Using the Perfect Dodge mechanic can give you an advantage as the brief slow in time is enough to land a few hits on Kodama.

Sclerokinesis is important in this battle, as you get to attack Kodama without getting damaged for a short amount of time. Make sure to use this and save up on healing items.

Use the Water Barrels + Electrokinesis

Water Barrels can be found in the corners of this arena. Use a Special Object Attack to inflict the Wet status on Kodama, then follow it up with Shiden's Electrokinesis to stun her.

Focus on Breaking Her Shield

Psychokinesis is the best way to break her shields. Make sure you focus on this in order to deal finishers that take away large chunks of her health.

In order for us to make the best articles possible, share your corrections, opinions, and thoughts about 「How to Beat Kodama Melone (Phase 2): Boss Fight Guide | Scarlet Nexus」 with us!