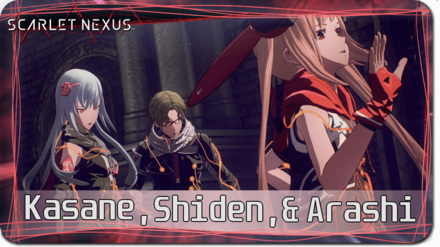 Kasane has Psychokinesis which enables her to throw damages at you and your team. Execute a Perfect Dodge or keep mobile to avoid getting hit.

Shiden has Electrokinesis which puts you into shock and temporarily paralyzes you. Use Sclerokinesis to not take damage from this attack.

Arashi has Hypervelocity which makes her extra fast. You can counter this by using Teleportation to boost your speed, enabling you to move from point A to B much faster.

These enemies do not have any particular weaknesses, but you can counter their abilities with you and your party's own. Likewise, we highly recommend covering them in oil using the oil rigs and then using Pyrokinesis to deal more damage.

How to Beat Kasane, Arashi, and Shiden

The only person you would have to defeat and deplete their HP is Kasane. Do this to trigger a cutscene and end the battle.

Use Sclerokinesis As Often As Possible

Use Sclerokinesis as often as possible to take less damage. You will be fighting three very powerful enemies, and having a protective coating will go a long way.

Use Pyrokinesis After Covering Them Oil

Use the oil rigs and then use Pyrokinesis to turn your enemies into a fireball. You will deal more damage this way.

Register as a member and get all the information you want. (It's free!)
Login
Opinions about an article or post go here.
Opinions about an article or post
We at Game8 thank you for your support.
In order for us to make the best articles possible, share your corrections, opinions, and thoughts about "How to Beat Kasane, Arashi, and Shiden: Boss Fight Guide" with us!
When reporting a problem, please be as specific as possible in providing details such as what conditions the problem occurred under and what kind of effects it had.