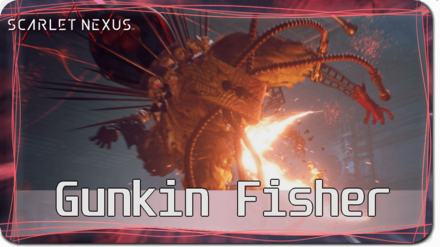 This is a guide to Gunkin Fisher, a boss in Scarlet Nexus for the Playstation, XBOX, and Steam. Read on to learn how to beat Gunkin Fisher, Gunkin Fisher's strengths and weaknesses, and the best SAS to use against this boss!

Gunkin Fisher can spray oil if players keep their distance from it. Master Perfect Dodge to not get sprayed with oil, or stay near its back.

It can make oil or water rain down once it climbs up the ceiling. Keep out of range to not take any damage!

Warning: Getting hit by these attacks will make you Drenched. When in this state, the player cannot dodge or sprint.

Gunkin Perry will climb up to the ceiling when threatened. It will try counterattacking from an elevated position using high damage Oil Sprays or deploying small Oil Critters.

Make sure to charge up your psychokinesis bar beforehand to be able to attack it from down under.

Gunkin Fisher is weak to Pyrokinesis especially after you can get it covered in oil. To cover it in oil, break the large Oil Tank on its back with Psychokinesis or using the Ceiling Gimmick.

How to Beat Gunkin Fisher

Charge up your Psychokinesis bar and lead Gunkin Fisher under the Special Objects hanging above and press L2 to drop them on Gunkin Perry. Doing so will deal a huge amount of damage to the enemy.

Likewise, you can do this when Gunkin Fisher scales up the ceiling. Once the L2 prompt shows up, take down the ceiling entirely along with the enemy.

Gunkin Fisher has a large Crush Gauge. Break its shell to activate Brain Drive. Brain Drive enables you to deal a massive amount of damage to the enemy, so enter Brain Drive as often as you can.

You will not be able to do melee attacks on Gunkin Fisher once it is up the ceiling. You will have to resort to using your Psychokinesis abilities to throw objects at it to deal damage.

We recommend filling up your Psychokinesis bar as often as you can.

Get it Covered in Oil and Use Pyrokinesis on the Enemy

Once you get Gunkin Fisher covered in oil, use Pyrokinesis on it to maximize your damage output.

Register as a member and get all the information you want. (It's free!)
Login
Opinions about an article or post go here.
Opinions about an article or post
We at Game8 thank you for your support.
In order for us to make the best articles possible, share your corrections, opinions, and thoughts about "How to Beat Gunkin Fisher: Boss Fight Guide" with us!
When reporting a problem, please be as specific as possible in providing details such as what conditions the problem occurred under and what kind of effects it had.