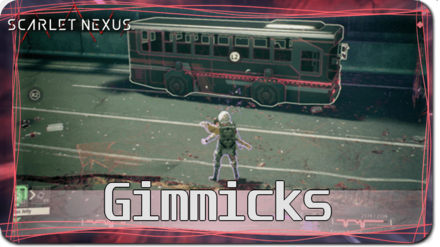 This is a list of Gimmicks that can be found in Scarlet Nexus on the Playstation, XBOX, and PC (Steam) platforms. Read on to find out what objects in the environment you can interact with! 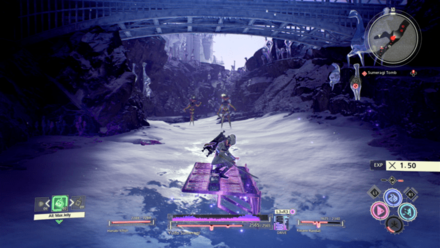 Gimmicks are interactable objects in the environment, with effects ranging from being able to traverse into secret locations or having the ability to move from point to point in the area quickly while also damaging enemies.

Represented by a Triangle 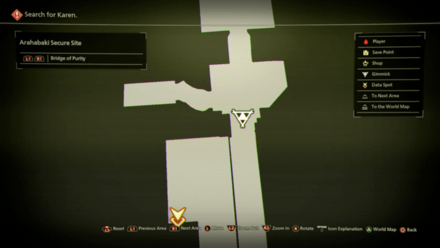 Gimmicks that can be found in areas are repsented by an upside down triangle. These Gimmicks, depending on what type it is, will require different methods to activate them, usually requiring the use of a SAS Ability.

More like a weapon than a simple object you can interact with, Giant Hooks can be used similar to how one would execute a Special Weapon Attack. This rears the hook back far enough before being plowed straight into an enemy. Using this is extremely helpful in taking off shells from shelled Others.

When enemies are standing over a train track, using Trains as a weapon is one good way to quickly deal with your foes. You can activate these Trains by using Psychokinesis on them, causing them to roll along the tracks to mow down any Other standing over them.

Electric Gates are similar to Locked Gates. It will lock you out of areas that you can otherwise explore and cannot be passed through with the use of Teleportation. Instead, use Electrokinesis on a panel near an Electric Gate to activate it, causing it to open.

Similar to Trains, using Buses to ram your enemies head on is one other valuable way to defeat groups of enemies in your path. Unlike Trains however, you can ride Buses from point to point, and can be activated by using Pyschokinesis on them.

Activating Oil Tankers with the use of Psychokinesis will cause a massive explosion that can effectively remove massive chunks of your enemy's HP.

Ice Blocks will prevent you from being able to move forward in your path. These can be removed by using regular melee attacks, but using Pyrokinesis can make destroying these blocks happen faster, allowing you to traverse your terrain at a quicker speed.

Ice Sculptures can be pulled to fall down on top of unsuspecting enemies. These are effective in removing shells from Others – not just singular ones, but multiple enemies all at once if you manage to pull it down on top of a group. You can use Psychokinesis to bring down these sculptures and cause quite a bit of damage against your foes.

Hoverboards function in the same manner as Buses do, including its method of activation. You can ride these boards to navigate around maps faster while also being able to mow down Others that appear before you as you move.

Closing Gates are entryways that lock up as you draw near. You can use Hypervelocity or Invisibility to get through these entryways before they close.

Laser Gates are entryways that are blocked off by a grid of lasers in its main opening. The best way to get through them is by using Teleportation to quickly get through to the other side, but using Hypervelocity is one other good way of getting past these arches.

Drones are highly controllable flying equipment that can be taken over with the use of Psychokinesis. They can be used to inflict Shock damage against enemies or to scout out distant places where enemies may be.

Register as a member and get all the information you want. (It's free!)
Login
Opinions about an article or post go here.
Opinions about an article or post
We at Game8 thank you for your support.
In order for us to make the best articles possible, share your corrections, opinions, and thoughts about "List of Gimmicks" with us!
When reporting a problem, please be as specific as possible in providing details such as what conditions the problem occurred under and what kind of effects it had.