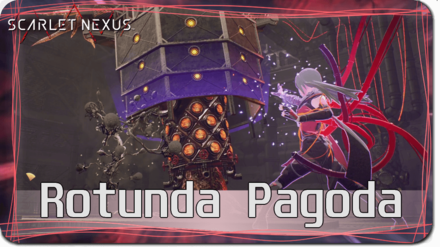 The primary attack of the Rotunda Pagoda is the open and close motion of its blast shield. For both instances, you will be knocked back and stunned if you are too close!

Defeating all the Filler Pillers in the area will open the blast shield, exposing Rotunda Pagoda to your attacks. If you get detected by its sensors during the time its core is exposed, the blast shield will close.

There will be four posts in the arena that emit electric fields. More and more posts will activate over time, until all 4 are active.

Avoid the large areas that they cover as the rings can stun the player with multiple instances of electric damage.

Normal Filler Pillers will have a snipe attack and a rush attack. Exercise caution as the snipe attack can interrupt player actions and sometimes knock you back.

Filler Piller Bombers have an orange sack-like bomb that hangs from their body. If you manage to kill one before it can drop its bomb, it will harmlessly drop its deadly cargo for you to use later.

The bombs can be used to easily break Rotunda Pagoda's shields when its core is exposed. Make sure to watch out for this type of Other during the fight.

Filler Piller Gunners have 2, trumpet-like attachments right next to their wings. They shoot a stream of projectiles that deals a lot of damage.

You can dodge their attacks or use a Perfect Dodge + Intercept combo to hurl their projectiles back at them.

Weakness: Use Duplication on Dropped Bombs

After exposing the Rotunda Pagoda's main shield, you have the opening to damage it's shell. Maximize your damage by using the dropped bombs of the Filler Piller Bombers.

Activate Kyoka's Duplication to make multiple copies of the bombs and hurl it at the boss with Psychokinesis.

How to Beat Rotunda Pagoda

While the shield is open, there are sensors that will close it again if you step on them. Use Hypervelocity to avoid them and attack the Rotunda directly.

Note: Since Psychokinetic Attack animations are long, it is almost impossible to channel without being detected. Use Invisibility or Hypervelocity to delay detection when hurling objects at the boss.

The Concurrent SAS Activation skill is very useful for this fight. We recommend learning at least 1 level of it to make this fight much easier.

When fighting the Filler Pillers after the first Brain Crush, electric fields will begin appearing in the arena. Avoid them to prevent getting stunned.

We recommend learning the Aerial Dash skill to keep mobile in the air if you do get caught inside the field's area.

Clearning the Filler Piller enemies in each phase exposes the Rotunda Pagoda's core. Make sure you clear them quickly to deal attacks to the boss.

Warning: The opening of Rotunda Pagoda's blast shield also deals damage. Make sure to keep this in mind if you're killing the last Filler Piller near the core of the boss.

Use the Duplication + Filler Piller Bombs

After exposing the Rotunda Pagoda's main shield, you have the opening to damage it's shell. Maximize your damage by using the dropped bombs of the Filler Piller Bombers.

Activate Kyoka's Duplication to make multiple copies of the bombs and hurl it at the boss with Psychokinesis.

Break Its Shell to Brain Crush

After breaking the Rotunda Pagoda's shell, use Brain Crush to deal massive damage to it. Repeat the process until you beat Rotunda Pagoda.

Register as a member and get all the information you want. (It's free!)
Login
Opinions about an article or post go here.
Opinions about an article or post
We at Game8 thank you for your support.
In order for us to make the best articles possible, share your corrections, opinions, and thoughts about "How to Beat Rotunda Pagoda: Boss Fight Guide" with us!
When reporting a problem, please be as specific as possible in providing details such as what conditions the problem occurred under and what kind of effects it had.