The Free DLC Weapon Pack has been released for Scarlet Nexus on the PlayStation, Xbox, and Steam! Read on to learn how to download the Epic DLC Weapon Pack for your own playthrough.

The Epic DLC Weapons pack will include 2 Weapon sets, one each for Yuito and Kasane. There will be 10 weapons in total, split between our two protagonists. Best of all, this 10-Weapon DLC is Free!

Available for All Platforms 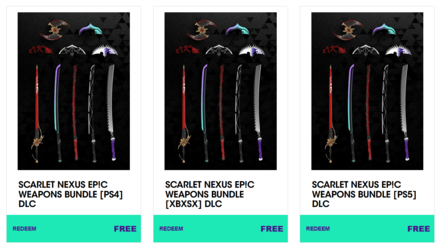 The Epic DLC Weapon Pack is not platform restricted. According to the Bandai Namco EP!C Rewards page, it will be available for PC, Xbox, and PlayStation.

How to Get Free DLC Weapon Pack

The Epic DLC Weapon Pack is still Region Locked! In order to redeem the DLC, players will need to be based in the UK to access the Bandai Namco EP!C Rewards page.

In order to redeem the DLC, players will also need to have an EP!C Rewards Account with Bandai Namco. Once created, players will be able to redeem any one of the packs for their chosen platforms.

In order for us to make the best articles possible, share your corrections, opinions, and thoughts about 「Free DLC Weapon Pack | Scarlet Nexus」 with us!