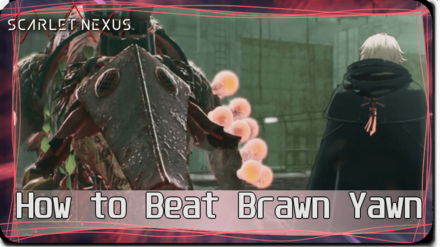 This is a guide to Brawn Yawn, a boss in Scarlet Nexus for the Playstation, XBOX, and Steam. Read on to learn how to beat Brawn Yawn, Brawn Yawn's strengths and weaknesses, and the best SAS to use against this boss!

The Brawn Yawn has a long range beam attack that deals massive damage. Make sure to avoid it as much as possible and find openings to attack it while it shoots.

The Brawn Yawn goes underground and rises up again to attack. Make sure to dodge it before it goes up to leave it vulnerable to attack.

Using Invisibility allows you to attack the Brawn Yawn undetected and deal critical damage. Aim for its arms as they are weak to Normal and Psychokinetic Attacks.

How to Beat Brawn Yawn

The laser attack can hit you from a long distance if you're not careful. Dodging this allows you to find places to attack and deal damage.

Note: If you manage to dodge the laser, the Brawn Yawn will remain stationary throughout the channelling animation. Use this opening to hit its weak arms.

Use Invisibility to avoid taking damage during this fight. When stationary, the Brawn Yawn will open up its weak arms to a charged backstab using Kagero's Invisibility.

Duplication allows you to deal double attacks when using Psychokinesis, breaking shells and dealing more damage to the Brawn Yawn. When its shell breaks, use Brain Crush to end the fight.

In order for us to make the best articles possible, share your corrections, opinions, and thoughts about 「How to Beat Brawn Yawn: Boss Fight Guide | Scarlet Nexus」 with us!