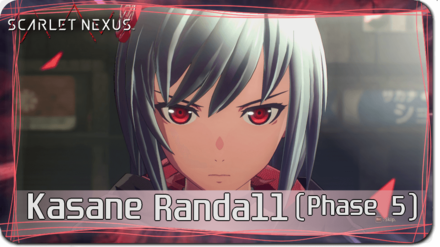 This is a guide to Kasane (Phase 5 Encounter), a boss in Scarlet Nexus for the Playstation, XBOX, and Steam. Read on to learn how to beat Kasane, Kasane's strengths and weaknesses, and the best SAS to use against this boss!

Kasane will be extra fast in Phase 5, making it almost impossible to attack her. Use Teleportation to catch up with her and be able to land attacks.

Kasane will use her normal melee attack Knife Throw a lot in this battle. Perfect Dodge her attacks and keep out of range to avoid taking too much damage.

Kasane will also use her Psychokinesis abilities during the fight but not as often as her Knife Throws.

We highly recommend mastering Perfect Dodge and using Intercept to fling objects back at her.

Kasane has a weak shell. Deplete her shell as much as you can to trigger Brain Crush and deal a massive amount of damage on Kasane. This will help keep the fight shorter, saving your resources and preventing you from taking more damage.

How to Beat Kasane (Phase 5 Encounter)

Nullify the First Two Enemies and then Kasane 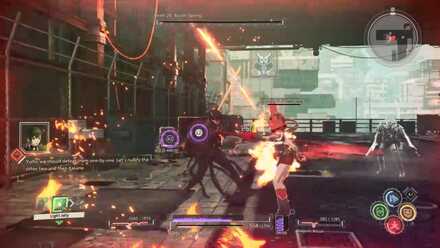 The sound strategy is to defeat Arashi and then Kagero first before focusing on Kasane. Nullify the first two enemies to lessen the amount of damage you take.

Warning: When significant damage is done to either Arashi or Kagero, they will enter Brain Drive. Focus them down when they do so.

Use Teleportation to Keep Up with Kasane's Speed

Use Teleportation to keep up with Kasane's speed. She will move very quickly and very erratically, making it almost impossible to damage her. Activate this SAS to keep up with her and attack her.

Kasane's shell is not as tough as other enemies, therefor, you can deplete it quicker by just using simple melee attacks. However, we also highly recommend using Psychokinesis or Sclerokinesis when available to deplete her shell mucher faster.

In order for us to make the best articles possible, share your corrections, opinions, and thoughts about 「How to Beat Kasane (Phase 5 Encounter): Boss Fight Guide | Scarlet Nexus」 with us!