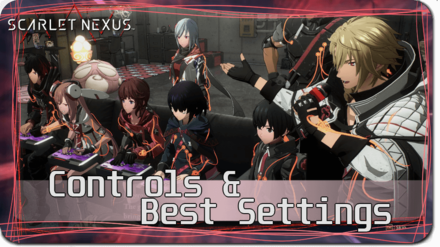 This is a guide on the basic controls in Scarlet Nexus. Read on to see the game's controls, how to use Psychokinesis, borrow allies' SAS abilities, and know what the best settings are in the game!

The default camera speed in-game works best, but you may wish to push the speed up to 4 for faster changing of perspectives, which proves particularly useful when battling against multiple enemies at once.

You can choose whether or not to zoom in or out on your mini-map, which is displayed on the right-hand side of your screen during gameplay. Having the camera zoomed in will help with seeing specifics of the route you are currently on, while having it zoomed out will show more points of interest for you as you move towards your objective.

The mini-map may also be rotated, allowing to change perspectives as you move the camera.

Register as a member and get all the information you want. (It's free!)
Login
Opinions about an article or post go here.
Opinions about an article or post
We at Game8 thank you for your support.
In order for us to make the best articles possible, share your corrections, opinions, and thoughts about "Controls and Best Settings" with us!
When reporting a problem, please be as specific as possible in providing details such as what conditions the problem occurred under and what kind of effects it had.