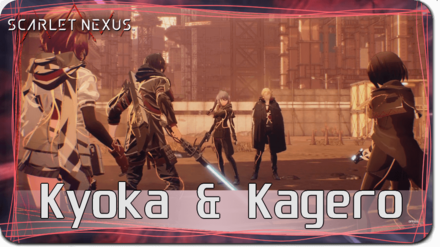 This is a guide to Kyoka and Kagero, a boss in Scarlet Nexus for the Playstation, XBOX, and Steam. Read on to learn how to beat Kyoka and Kagero, Kyoka's and Kagero's strengths and weaknesses, and the best SAS to use against this boss!

Kyoka and Kagero Stats and Information

Kyoka has SAS: Duplication for this fight. At the start, she will immediately make 2 copies of herself which can attack you from different angles.

Kyoka will also use variants of her Assault Vision and Combo Vision during this fight. Both kinds will interrupt your attacks should they hit. Use Sclerokinesis or Teleportation to avoid them. 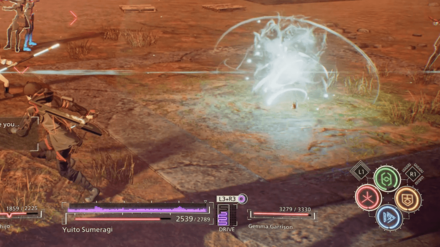 Kagero has SAS: Invisibility for this fight. He will periodically turn invisible making it impossible for you to use the lock on feature in combat.

Like Kyoka's Assault Vision, Kagero will do a Throwing Knife AoE Attack when he does a charge-up animation. Unlike Kyoka's, his is easier to dodge.

How to Beat Kyoka and Kagero

Focus your Attacks on Kagero Donne 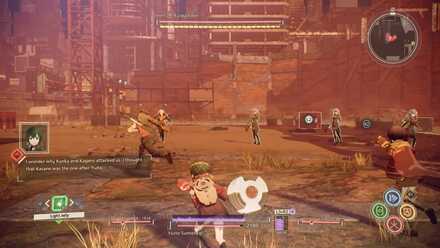 Kagero is easier to deal with by using a mixture of Psychokinesis and Pyrokinesis. Even if he does turn invisible, he easier to attack since he remains a single target throughout the fight.

Warning: It is not advisable to go after Kyoka since she uses Duplication. While you can easily get rid of her duplicates, they will just keep respawning over and over.

Cover Them in Oil then Use Pyrokinesis

There will be a lot of Oil Barrels in the area for you to use. When focusing either Kagero or Kyoka, use Psychokinesis on the Oil Barrel to drench them in oil, then set them alight with Pyrokinesis.

Use Clairvoyance When Kagero Triggers Invisibility

Kagero has Invisibility, which allows him to disappear from the battlefield. Determine where he is by using Clairvoyance.

Note: Clairvoyance will not work on Kyoka's duplicates. The only way to determine the real Kyoka is to lock in on her and switch targets until you find the one with a crush gauge.

Use Perfect Dodge to Avoid Damage

Using Perfect Dodge can grant players valuable invulnerability frames during battle. Try to make use of this tactic to avoid some of the more pesky AoE attacks like Kyoka's Assault Vision.

Alternatively, players can also use Sclerokinesis to negate majority of the damage. However, make sure to keep an eye on how much time you have left on it.

How to Perfect Dodge

Deplete either of their Shields to End the Fight

A cutscene will play before you get the chance to completely destroy either of them. Deplete either of the two's shield (Crush Gauge) and they will acknowledge your strength before retreating.

Register as a member and get all the information you want. (It's free!)
Login
Opinions about an article or post go here.
Opinions about an article or post
We at Game8 thank you for your support.
In order for us to make the best articles possible, share your corrections, opinions, and thoughts about "How to Beat Kyoka and Kagero: Boss Fight Guide" with us!
When reporting a problem, please be as specific as possible in providing details such as what conditions the problem occurred under and what kind of effects it had.