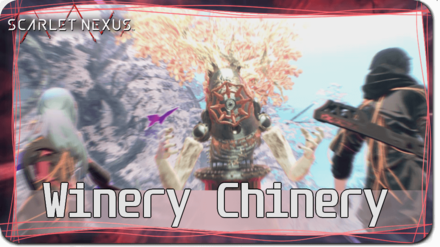 The Winery Chinery launches a water attack that will damage you and deal a status effect. Avoid this and counterattack using Psychokinesis.

The Winery Chinery also has an attack that it can hit when you get too close. Make sure you keep your distance, since this punch can knock you down for a couple of seconds.

You can stun the Winery Chinery by using Psychokinesis to hit its hind legs. This will allow you to deal free damage, or have time to heal up.

Use the Fuel Trucks

Lure the Winery Chinery close to the Fuel Truck and detonate it to deal massive damage!

Activate Psychokinesis with Yuito to bombard the Winery Chinery with projectiles to continue breaking its shell.

Register as a member and get all the information you want. (It's free!)
Login
Opinions about an article or post go here.
Opinions about an article or post
We at Game8 thank you for your support.
In order for us to make the best articles possible, share your corrections, opinions, and thoughts about "How to Beat Winery Chinery: Boss Fight Guide" with us!
When reporting a problem, please be as specific as possible in providing details such as what conditions the problem occurred under and what kind of effects it had.