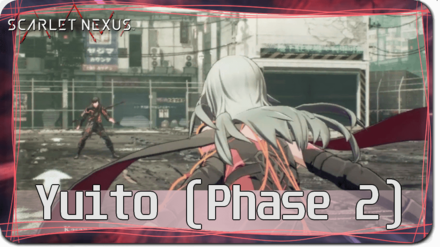 Yuito's primary attack is a series of sword slashes. While these attacks have a short range, they are very quick. Be sure to avoid them and only counterattack when he isn't moving.

Note: After the third slash, Yuito will stay in place for a short duration. Use this opening to get Normal and Psychokinetic Attacks in.

Like Kasane, Yuito can also use Psychokinesis to throw objects at you. Use Perfect Dodge and Intercept these objects to counter this attack.

The best way to counter Yuito's Psychokinesis is by using Kasane's own abilities. Keep throwing items at Yuito to break his shields and allow for a Brain Crush opportunity.

How to Beat Yuito Sumeragi

Counter His Psychokinesis with Intercept

You can counter Yuito's Psychokinesis attacks by performing a Perfect Dodge at the last second.

Doing so will prompt an Intercept option where you can hurl the object back at Yuito. Use this to hold off his attacks and deal more damage.

Use Brain Crush on Yuito

When you manage to deplete Yuito's Crush Gauge, a prompt will appear to perform a Brain Crush. Follow the button tooltip to take away a lot of his health in one go!

Use the Special Object to Finish the Fight

When Yuito dips below 1/4th of his total health, players can use the electric poles in the parking lot for a Special Object Attack.

Doing so will start an animation sequence where Yuito and Kasane must fight for control over the objects. Winning the button mash will crush what little remains of Yuito's shield and bring the fight to an end.

This boss fight is a special scenario, as even losing the battle will continue the story phase. Use this as a basis for future fights and practice going against a fellow Psychokinesis user.

Register as a member and get all the information you want. (It's free!)
Login
Opinions about an article or post go here.
Opinions about an article or post
We at Game8 thank you for your support.
In order for us to make the best articles possible, share your corrections, opinions, and thoughts about "How to Beat Yuito Sumeragi: Boss Fight Guide" with us!
When reporting a problem, please be as specific as possible in providing details such as what conditions the problem occurred under and what kind of effects it had.