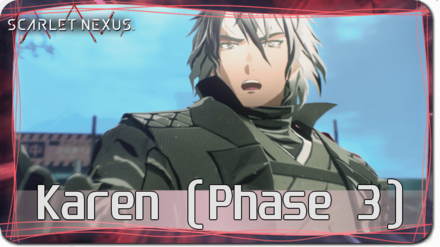 This is a guide to Karen Travers, a boss in Scarlet Nexus for the Playstation, XBOX, and Steam. Read on to learn how to beat Karen Travers, Karen Travers' strengths and weaknesses, and the best SAS to use against this boss!

Karen's main attack will be a 3-hit melee combo that can deal high damage if all of them connect. This can be avoided through dodging or Perfect Dodging. The latter will give you an opportunity to strike back.

Karen will often unleash an aerial Electrokinesis attack that deals damage in a small AoE in front of him. While the range is small and the attack easily sidestepped, be cautious as getting hit will Stun you!

Karen will have access to Cryokinesis for this fight. He begins by kneeling before summoning spikes of ice from the ground that deals massive damage to the player. Use Arashi's Hypervelocity to get clear of the attack's large AoE.

When you deplete a certain amount of health from Karen, he will go into his Brain Field. In this state, he will hit harder and spam his SAS abilities more.

Make sure to alternate between Hypervelocity and Teleportation to maximize the time wasted inside the Brain Field.

Karen Travers has no weaknesses. No matter what level you fight him at, the damage you deal will always be minimal as this is a special scenario fight. Focus on surviving instead of maximizing your damage output.

How to Beat Karen Travers

Use Hypervelocity to Dodge Attacks

Hypervelocity is the easiest way to avoid attacks and help keep you fighting during the battle. This SAS is particularly useful when Karen uses Cryokinesis.

Alternatively, players can use Luka's Teleportation to dodge and weave. However, it is sometimes easier to simply do a Perfect Dodge since it requires less timing.

The battle with Karen Travers is a special scenario, as he would easily beat you in a short period of time. Whether you survive or not, the fight will eventually end, triggering the next part of the phase and allowing you to continue the game.

Register as a member and get all the information you want. (It's free!)
Login
Opinions about an article or post go here.
Opinions about an article or post
We at Game8 thank you for your support.
In order for us to make the best articles possible, share your corrections, opinions, and thoughts about "How to Beat Karen Travers: Boss Fight Guide" with us!
When reporting a problem, please be as specific as possible in providing details such as what conditions the problem occurred under and what kind of effects it had.