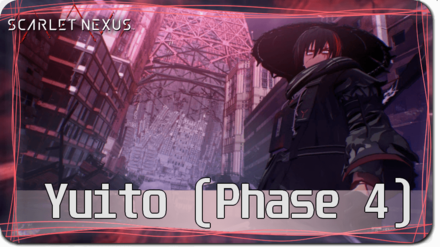 Yuito has his own set of sword attacks that have wide angles and quick slashes. Avoid them to make sure you can deal damage to him.

Warning: Yuito will sometimes do 5 slashes instead of 3. His last 2 will sweep in a wide arc so make sure to be cautious of it.

Yuito's mastery of his SAS has made him become adept in Gravikinesis. This will make him throw objects at you that you can counter with your own Psychokinesis.

Using your Psychokinesis to Intercept Yuito's thrown objects is a great way to deal more damage. Time them right and you can avoid taking damage with a Perfect Dodge.

How to Beat Yuito Sumeragi (Phase 4)

Hold Him Off (Special Scenario)

The objective of this fight is to survive long enough until the cutscene. You will not be able to defeat Yuito in this fight.

Warning: Unlike previous special scenario fights, dying here will reset the fight. Make sure to focus on staying alive!

Register as a member and get all the information you want. (It's free!)
Login
Opinions about an article or post go here.
Opinions about an article or post
We at Game8 thank you for your support.
In order for us to make the best articles possible, share your corrections, opinions, and thoughts about "How to Beat Yuito Sumeragi (Phase 4): Boss Fight Guide" with us!
When reporting a problem, please be as specific as possible in providing details such as what conditions the problem occurred under and what kind of effects it had.