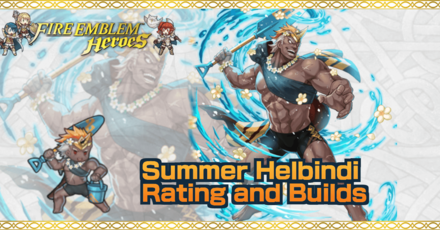 This is a ranking page for the hero Helbindi - Seaside Scourge from the game Fire Emblem Heroes (FEH). Read on to learn the best IVs (Individual Values), best builds (Inherit Skill), weapon refinement, stats at Lv 40, and more for Summer Helbindi.

The best IVs for Summer Helbindi are +Atk and -Spd. His offensive ability solely relies on Atk as his Spd is too low to be functional. Because of this, it is best to take Spd as his bane as it is practically useless for him. Be aware that his Spd is a superbane meaning that he will receive -4 in this stat.

Summer Helbindi is a close physical attacker (range = 1). Therefore, when not accounting for the Weapon Triangle, the amount of damage he deals will be equivalent to his Atk minus the foe's Def stat.

Sandfort Spade+ grants +4 Atk/Def to Summer Helbindi if a skill like Rally or Hone is active on him. This is very easy to trigger and makes Summer Helbindi great in mixed emblem teams or if paired-up with support units like Veronica or L!Azura.

Summer Helbindi has access to the very powerful Rally Atk/Def+ which grants +6 Atk/Def to allies. As Summer Helbindi is a decent attacker, Rally Atk/Spd+ combined with Panic Ploy 3 allows him to also become a pretty good supporting unit if ever attacking is not an option for him. Situations like these include fighting against a high Def blue unit.

Can raise your arena score

R Duel Infantry is a special skill that treats the unit’s stats as 170 in the Arena, allowing your overall score to increase when using him. It is usable by any red infantry unit, so equip it and increase your score as you would like, but keep in mind that as an A slot skill it means you will lose the ability to equip useful A skills like Fury.

Should you Unlock Potential for Summer Helbindi?

Helbindi - Seaside Scourge Only Appears as a 5 Star Hero!

Summer Helbindi as a Source Hero

Summer Helbindi can be used to inherit the skills Rally Atk/Def+ or R Duel Infantry 3. However, Summer Helbindi is a special hero whom you can only get from certain banners. Please think carefully before fodderring him off!

How to Get Summer Helbindi / Illustrations / Voice Actor / Quotes

How to Get Summer Helbindi

Summer Helbindi is a limited time Hero who can be pulled from a Special Heroes Summoning Event. They do not appear in regular summons.

Register as a member and get all the information you want. (It's free!)
Login
Opinions about an article or post go here.
Opinions about an article or post
We at Game8 thank you for your support.
In order for us to make the best articles possible, share your corrections, opinions, and thoughts about "Summer Helbindi Builds and Best IVs" with us!
When reporting a problem, please be as specific as possible in providing details such as what conditions the problem occurred under and what kind of effects it had.